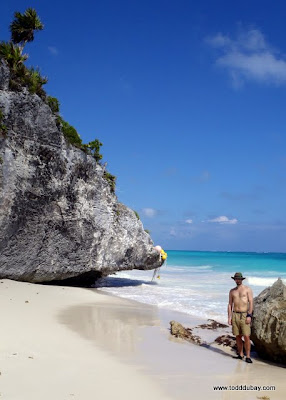 Checking out of the hostel and running around took most of the morning, and by the time we settled into our early afternoon bus south, I was ready to be rid of Cancun. In retrospect it was probably a combination of things: hearing Chris rave about how "expensive" it was in Cancun although, compared to the US, it seemed dirt cheap, plus an extreme curiosity to see what "real" Mexico was like as opposed to the place where the signs were also in English.


Before leaving the terminal, Chris recognized one of his traveling buddies from San Francisco and San Cristobal climbing aboard our bus! Enrique is a charismatic Ecuadorian world-traveling photographer who happened to be Couchsurfing that night in Tulum. He's also one of those guys that other guys want to be: young, handsome, smooth, personable, confident, and not to be bothered by the blase, mundane trivialities that typically cripple the masses! Enrique oozes testosterone, doesn't particularly care where it flows, is an excellent photographer, and I would learn the next day that his camera is not only for photographs: in Enrique's hands, it's an ice breaker. 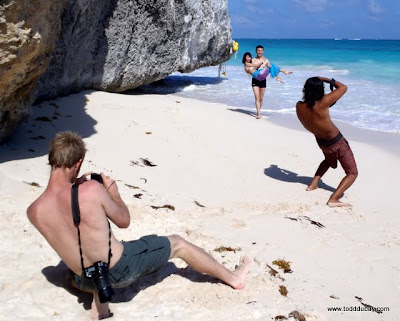 I played the role of sightseer while Chris and Enrique caught up. That made for a nice 2-hour ride thru Playa del Carmen to Tulum. Once their we took a taxi a few kilometers out of town and to a relatively well known hostel Chris found via the Internet : The Lobo Inn. I had been slowly getting sick for a week or two prior to arriving in Mexico, so elected to stay behind while Chris and Enrique returned to Tulum for dinner with his Couchsurfer host. It was here that I felt a twinge of the potentially acute pain of my language barrier for the first time. 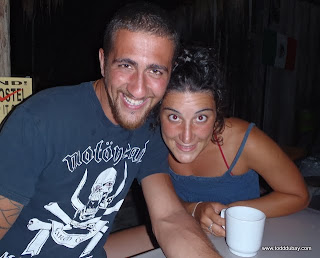 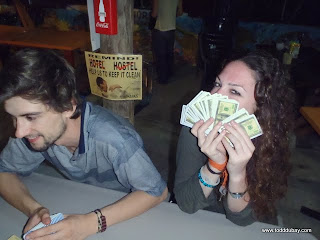 There were several interesting people at the hostel, including a couple Israelis, an Argentinian Enrique had encountered elsewhere in his travels, and Romain--a Frenchman living/studying in Cuba who was vacationing in Tulum. Thankfully, the Israelis and Romain spoke English, so by the time Chris returned I was on my second huge 30-peso beer from the store next door and having a great time despite the cold.

Friday goes down as one of my highlight days. Enrique met us at the hostel, Romain, the Frenchman, joined up, and the four of us set off to see the Tulum ruins situated across the highway on the Caribbean Sea.

I have long had a keen interest in the Mayan civilization so seeing any and all ruins is constantly near the top of my things to see. The fact that Tulum's ruins are set adjacent to the beach made the experience that much better, and it so happens that there is a phenomenal public access beach making it nearly ideal.

Frolicking in the Caribbean, I realized that this was the first time, at least on these travels, that I actually had gotten IN the sea. With the exception of Santa Barbara, the rest of California, Oregon, and New Jersey were always too cold.  I made up for it and had the sunburn to prove it. 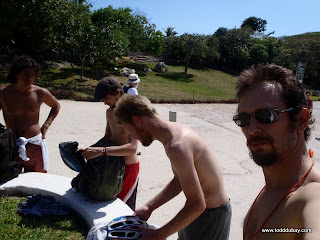 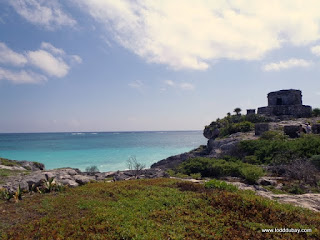 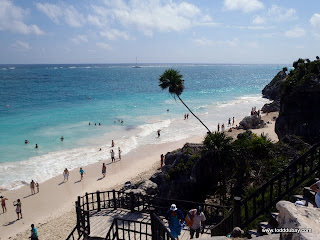 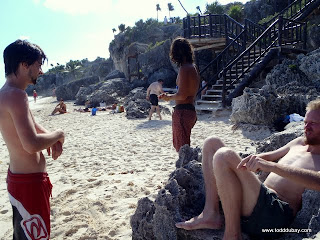 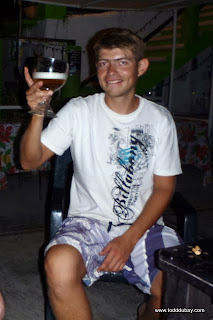 Friday night continued what proved to be a fun, albeit expensive pattern of conversing and drinking in the Lobo Inn's common area. The folks staying there were from all over: Mexico, Argentina, France, Israel, Italy, Canada, the US, Korea, and even the Canary Islands.

One of the more interesting cats was Frankie, an enigma from Cancun who was just staying there...for whatever reason. He had a car and a great deal of knowledge of the area so he would take people on excursions to places like the nearby cenotes, a network of underwater rivers that periodically surface in the jungles or caves in the area. Later in the weekend, he snorkeled out into the Caribbean spearfishing, got an Angelfish, and let everyone at the Lobo eat it. The one image of Frankie I'll carry with me is how he was always smiling and walking around with his beer in a huge mug that reminded me of a king's personal stein.

It was an incredible place, but The Lobo Inn was quite pricey ($140 MX), so Saturday Chris ventured off to scout camping possibilities on the beach where he met an fascinating beach urchin, Mil, from India. He was intensely obsessed with the familiar idea of synchronicity with a a tireless, focused mind. He offered to share a beach side cabana with us that he intended to occupy with another traveler, but checking it out we learned that this "friend" of his had had his belongings stolen the night before. My warning sirens were blaring as we chatted with this supposedly unfortunate soul, so we decided to pass on Mil's beachcomber hospitality in favor of another night at the Lobo.
Saturday night was another beerfest, Chris ended up sleeping in the jungle somewhere between the road and the Lobo after failing to find Mil, and Sunday was the Super Bowl.  Chris had been contacted on Saturday by a Scandinavian Couchsurfer staying in Playa del Carmen who hoped to hitchhike with other people to Belize to renew her 180-day travel visa, which she said was about to expire. We made arrangements to meet her at the Lobo at 10am Sunday to head south, but when she arrived we learned that Maria learned on the way down that she'd miscalculated: her visa had ALREADY expired and that she needed to go to Cancun and have a lawyer straighten it out!

In addition to all of that, my cold had worsened and I was losing my voice, so we decided to relax at the Lobo for one more night to watch the Super Bowl. We were stuck the to the Spanish broadcast on satellite via Fox Sports, but that was less problematic than the absence of the American commercials! However, did you know that Joe Montana is hocking cheap Mexican beer these days? Ouch.

Monday was once again getaway day, and we had noble intentions to hitch south, but my cold had worsened yet again. Mil had also reappeared out of the blue and was making his way back toward Cancun hopeful for a flight to Cuba. My girlfriend and I had also begun discussions about her flying to Cancun at the end of March. Considering my declining health, it seemed like a good idea to perhaps simplify things and bus to our eventual destination: San Cristobal, Chiapas. I could spend a solid six-weeks learning at least rudimentary Spanish as well as about Chiapas and the Zapatistas.

By early afternoon, Chris and I were joined by Mil on the bus to Cancun beginning a 24-hour journey west to San Cristobal and a fateful landing at Jose Luis's Galactic Station... 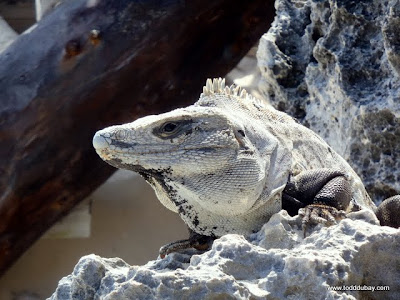 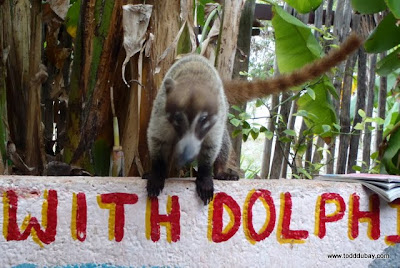