Despite simmering on a hidden backburner for a year or two, the notion of traveling to Mexico and the rest of Latin America is something that never went away. A trek to Peru was one of my original ideas, long before 2008 when Chris and I spent countless hours bouncing adventureman ideas around his Denver apartment imagining such an adventure. As you can imagine there were the endless questions about things such as safety, corruption, the culture, and language barriers. Then in February '09, when I reconnected with my "long lost" family, the travels made it clear that they had their own ideas about where I would be going and why.


When Chris visited for Thanksgiving, it became apparent that 2010 had served an oddly similar purpose for each of us; the year had been very difficult on both fronts for strangely similar reasons. A peculiar byproduct of this difficult year was that by processing and discussing its less-than-flattering events, it appeared that we were suddenly able to redefine and realign our friendship.

We were dramatically less dogmatic than even a year ago, and less sure of the positions that we had quietly battled over all the way thru Slab City. The only thing I was sure of at this point was that while I knew for certain I had been given a slightly elevated metaphysical glimpse, I have no idea what the entire mosaic looked like nor any real idea as to where these microscopic nuggets fit in it.

They say the only real wisdom is in knowing you know nothing. I get that. It was a nice, calm couple of weeks where we were able to just relax and reconcile grievances from my stay in Port Townsend and even all the way back to 2005.

While I reconciled antiquated daddy issues, Chris grasped and ran with the Latin America idea. It was never far off his visible horizon and simply a matter of time, money, and logistics; matters tenuously solved last fall. While he visited, the end of December was set as a hard departure date which would be followed by a few weeks of Spanish classes either in Guatemala or San Cristobal, Chiapas. With that decided, we had an exploratory conversation surrounding me meeting him in Cancun when he wrapped up his classes at the end of January. That would give me a couple months to prepare and learn at least a little basic Spanish.

When he set off for San Antonio the first week of December, that was the "plan" (ha!). Then, just prior to his departure for Mexico on New Year's Eve, there was a brief hiccup when his "I Walk Alone" trait reappeared and we briefly decided that, rather than proceed with just one month in mind, it would be best to scuttle our plans all together.

For the next couple of days, something in my brain violently rejected this notion. Buoyed by Laina's encouragement, the Sunday after New Year's we reversed it and decided to proceed on 2/1, for a month or so, see how it went, and go from there.

For once, plans went as planned. Buying the airline ticket was a big step: there would be no turning back. Come Hell or high water, I would be flying into Mexico without a return ticket on February 1st. While Chris spent January adjusting to Mexico then settling in learning Spanish in San Cristobal, I gently reintroduced myself to writing and brutally attempted (unsuccessfully) to cram a whole lot of Spanish into a little brain.

Before I knew what was happening, February was here. I had thought for sure I'd be shitting myself as the day approached, but there was less anxiety about Mexico than about Devils Tower '09 or even Santa Barbara '08!

When Laina dropped me at the airport, there was nothing but excitement joining the typical separation anxiety that comes from having a home! Adding to the symbolic tapestry was the beginning of what the media dubbed a nationwide Snowpocalypse: it was 9 BELOW zero when I landed in Denver for my connection to Cancun. 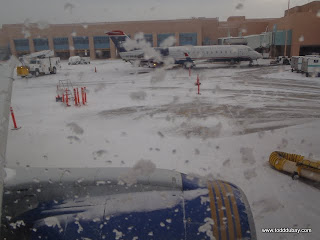