Devils Tower turned out to be a calm, quiet period of adjustment. Not quite the makings of marketing myself as a modern day Marco Polo!

The two days after de-busing in Gillette were harder than I had expected; 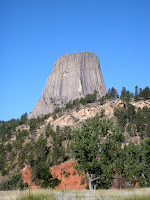 failing to consider that it was almost exactly a year to the day since I had last traveled solo. Then, it quickly became obvious that despite the high traffic volume, it was going to be a hard sell hitching the 30-miles back to I-90 in Sundance. The vast majority were vacationing families and retired RVers who often see my backpack as sure indication that I am a thief. Or worse. Despite all this, the people were friendly. Devils Tower loomed overhead offering a constant, peaceful reminder of why I was there and the silent but steady reassurance that I was on the right track. 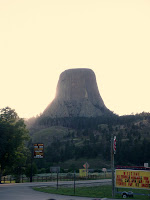 Devils Tower is about 80-miles northwest of Sturgis, South Dakota. I had missed the rally, but gotten the bikes. I've always liked and respected these people. Bikers, and backpackers/hitchers often share an unspoken sense of familiarity that stems from a thirst for freedom and authenticity. Had my pack fit on a Harley, I would have been on my way almost immediately! But it wouldn't. And I certainly wasn't.

A few hours after arriving on Wednesday, the weather turned from cool but sunny to cold, windy, & wet. 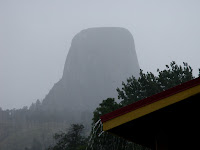 The hot topic everywhere was always the odd weather in the region; how wet it had been and wondering if summer had missed its left turn in Albuquerque. As the sun set behind the Tower, it felt more like November than August, and I had yet to scout out a suitable place to camp. In the end, I succumbed to fatigue and paid the KOA's ridiculous tent fee, figuring I could at least get a good night's sleep and a shower in the morning.

Thursday was bright, sunny, and warm. It was spent sitting and sunning. 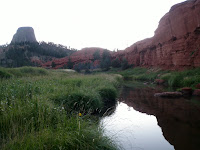 I had a nice perch propped against a log by the road, and proceeded to just be, making mental adjustments. There were several trips into the Devils Tower Trading Post for coffee and water, and I slowly became a familiar face to the staff. I finally started updating the blog, but when I went to upload it via Pocketmail, the number Chris and I had been using was out of service! Out of frustration, I concluded that Friday would be a better day to figure that out.

With Friday and the weekend traffic came the feeling that I was back to myself. 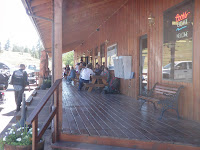 I settled in to my situation and made a conscious effort to stay present and remember patterns. Whenever I had been "stuck" somewhere for an extended period, the results were memorable and dramatic, such as meeting Ken after two days in McCammon, Idaho. This had much the same feel; a time to "Sit Down & Shut Up" so I wasn't trying very hard to leave. As I told various people, there are worse places to be "stuck" than Devils Tower!

Around noon, I found another Pocketmail number that worked so spent most of the afternoon writing. 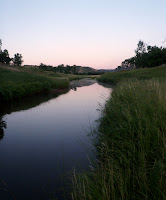 It seemed to me that this helped me to tap into Brian's "flow" and from then on, coincidentally, interesting things began to happen... and haven't stopped since.

At dusk, I snuck into KOA intending to follow a game trail along the Belle Fourche river into secluded grassland frequented only by deer and antelope. While filling my water bag, a middle aged woman hollered at me asking if I wanted a beer. Indeed I did. Before I had even sat down, Lori had offered a spot to camp at their site.

Lori and her big sister, Chris, were from a small town north of Rapid City, and spending the weekend celebrating Lori's 50th birthday.

Lori had been "celebrating" quite hard; she was already drunk. And she was slightly upset. Her boyfriend was a truck driver and had been stranded in Denver, missing this potentially depressing birthday. It then became crystal clear as to the reason she had invited me over: I had been drafted into the Boyfriend Substitution Program. Within 10-minutes, she had begun rubbing my arm and trying to hold my hand, much to my polite, yet obvious, objections. It wasn't long before she was asking for a kiss and offering to let me sleep in her tent! "You can't sleep in THAT little thing!" While flattered, I obviously wanted no part of that and repeatedly told her I'd be sleeping, all alone, in my little bivy.

I needed to handle this delicately because, while amusing, I had also lost the chance to get to my field with the sunset! Chris thankfully came to my rescue by putting Lori (alone) to bed, but then things suddenly went Jerry Springer. Lori's affections turned to the wrath of a drunken redneck scorned! She began to resemble an incorrigible 10-year old, sneaking out of her tent and screaming at Chris every time she reeled her back in. Dozens of times, "Get the fuck away from me!" was heard by everyone at the family friendly KOA! The last I heard from Lori this Friday night was "I'm not staying out there with that guy here!" as she climbed into her truck to pass out. I was amused at how quickly I had gone from "adorable" to "that guy!" Jer-ry! Jer-ry!

Chris and I sat chatting for another half hour before I climbed into the bivy (alone) looking forward to Saturday. The feel of things had changed dramatically, and I thought to myself that it felt like things had finally gotten started.