Considering its beginning and end, this was one of those monumental days. 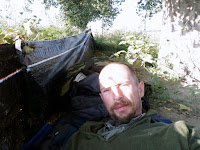 I was lazily unrushed after waking up, tinkering around taking pictures of everything from my nest to an inchworm that had found refuge on my water bottle. I've seemed to learn to tune in to my senses, and when I suddenly felt an urgency to pack up, get coffee, and out to the ramp, that's exactly what I did although, after five hours of nothingness the night before, I had no logical reason to be in a rush.

Saturday, however, was NOT Friday. 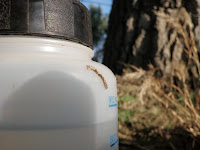 Don stopped in front of me. This was the first time I can recall a car doing this. The second thing I noticed was that this fancy van had Ontario plates. These were both good signs. He had obviously picked up hitchers before, had a smile painted on his face, and I have had phenomenal success with foreign rides dating back to Florian (German) and Eric (French) in '08.

I instantly knew I was going to like Don. He was an original 60's hippie and on his way from Sault Ste. Marie, Ontario to Nevada for Burning Man; a pilgrimage he made every year. There are two Sault Ste. Marie's. One in the upper peninsula of Michigan, and the other directly across the border. This gave us the immediate connection of familiarity, since I had visited Sault Ste. Marie, MI. When Don asked why I was going to Bozeman (my sign), I replied, "Because it's on the way to Boise." His reply changed the entire complexity of my immediate future. He too was going to Boise to meet friends, then continuing on to The Burn... and I was welcome to ride along the entire way if I liked. He had been driving a long time, and simply wanted some conversation to help pass the time. Billings to Boise? In one ride? Holy Shit.

The offer was incredible, but I still wanted to try to connect with Michele in Butte first, if I could. I was in no hurry to get to Boise because no one knew I was coming, and I had no idea when I would ever be back to Montana. I sent an immediate text and email to Michele, hoping she happened to get to the Continental Divide to get cell service by the time we were to Butte, a couple hundred miles away. If I heard nothing from Michele by then, I'd be contacting my sister, Lynette, to tell her that if she was around we could finally meet each other face-to-face for the first time! I had not set a time for my arrival, not knowing myself when I would get there, and hadn't talked to her in a couple months. She simply had no idea where I was.

The ride thru Bozeman to Butte was one of the best to date. Don and I chatted about everything from history, to politics and sociology, to spirituality and conspiracy theory. He was an extremely intelligent, insightful, and aware individual, and it seemed that we always had something to add to the other. I was particularly interested in his political views, since he was Canadian, and was intrigued that he had extensively studied Roman history and viewed the US as running the same road. He found the entire health care "reform" debate laughable, and the opposition to socialized medicine as a simple case of special interest trying to keep control of the coffers. Being Canadian, however, he seemed convinced that government was the answer to most problems, which of course, with me in the car, led to healthy debate! The more I have discussed these topics, the more convinced I am that the best solution for this country, right now (in lieu of a clean swep of all politicos) is the neutering of government, and limiting its influence to as great a degree as possible.

Don was also a musician, and claimed to have been in a rather successful local band, The Pavement Artists, in Sault Ste. Marie. We also shared an acquaintance there: City Commissioner Ray Bauer, who was once in radio and the man who hired me at WRKR in Kalamazoo. We had a very nice discussion on music, and I don't believe there was a lull of more than a minute. 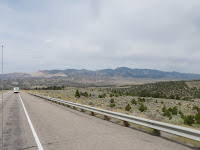 The Rocky Mountains come into view, the climbs become steep, and the views incredible as you approach Butte and its statue of Mary watching over the small city. Don stopped at a Flying J south of Butte as both a pit stop, and a favor to me to give Michele a few more minutes to get my messages. We got snacks and coffee, and stretched for about 45-minutes before accepting fate and moving south toward Idaho, and VERY familiar grounds along our new road: I-15.

I soon received a call from Lynette thru our sister, Shelly, and let her know that we planned to be in her backyard in just a few hours. I hated that I was giving such short notice, but she and her husband seemed happy to (finally) have me. I quickly thanked God, and as we crossed into Idaho, Don and I had resumed our chatathon.

Idaho Falls came and went, and soon I saw familiar sights. My 2008 route had taken me across southern Idaho, and as we passed through 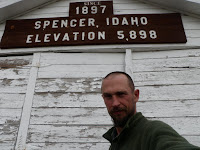 Pocatello I began to point to significant spots that I had enjoyed so much... although at the time, I sometimes didn't realize it! "There was the spot where Z had picked me up... I crossed the Snake River here... I slept there." Pretty soon, as dusk approached, we happened to gas up at the Flying J that made them my favorite truck stop: Jerome/Twin Falls. The spot where Jack dropped me off. This was, obviously, quite cool for me and I came to realize how much I had enjoyed Idaho, and the unexpected nostalgia last year's trip had generated! I was very glad we did this in the daylight.

Around 10pm, with Don fading, we were entering Boise in an intense, but dry, lightning storm. Don and I found the spot where Lynette had asked us to meet her, and after grabbing a shitty, expensive espresso all that was left to do was wait for the moment when I would finally meet the last of the still "unknown" sisters...
Posted by Todd X at 5:37:00 PM