When people ask, "Todd, why do you do this?" I often answer that it's funny how the people you meet under odd circumstances can significantly affect you. 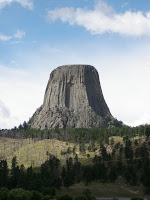 In March 2008, just a few months after my divorce from radio, I took a job as a carnie with an outfit in west Texas. That may be the furthest from the expected vocational path you would expect me to walk, unless you know me well! At that point, it made perfect sense. As I saw it, I had worked with legalized, dishonest criminal-minded scum for twelve years. Why not authentic criminals living on the fringe? I never intended to do it for long; a month or two as I tried to raise money for 2008.

Many of the assumptions about carnival life are accurate. My first destination was Odessa, TX. In my two days there, I believe I saw every drug man has produced to date, and listened to a knife fight outside my bunkhouse. 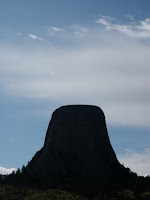 (I was just pissed that they had woken me up at 5am!) And yes, the arrest warrant to employee ratio is quite high!

My final straw in Odessa was walking by a kiddie ride just prior to opening and finding a pouch of cocaine on the ground. Not so bad at 2am, but the carnival was about to open...and cocaine looks like sugar to a child. With that, I had had enough. I wasn't alone. One of those joining me on the bus to New Orleans for a change in assignment (and scenery) was Jimmy. He was Chickasha Indian, lived in Oklahoma when he had a home, and I had gotten to know him a bit over the short time we were both in Odessa.

I was primed for tangible, external ideas after spending the winter transitioning away from radio and buried in abstraction. As we rode across the expansiveness of the Texas Republic, we chatted about the similarity between my blossoming beliefs and that of the Chickasha Tribe. He was passionately proud of who he was, particularly his heritage. However, like Dennis, he was also tormented, although not to the same extreme. In Jimmy's case, he was cut off from who he felt he was: a Chickasha. It was as though he were transplanted to live with an African tribe; society had nothing for him. He was rotting from within so, like Dennis, he drank. Alot. This is something I can easily relate to and unfortunately Jimmy's story is not uncommon around the southwest.

Once in New Orleans, we were assigned to carnival group that was in a holding pattern thru Easter weekend. While drugs weren't tolerated, they created their own special brand of drama. This organization was known as a "gay friendly" carnie group, and I learned later that what I took as standoffishness when I arrived actually stemmed from some of the boys laying dibs on the "fresh fish." Me!

They were quite disappointed, and one individual was particularly spiteful, when they learned that I like girls. A great deal. This, along with nothing better to do with their idle time created a thick, palpable negativity. The kind you can feel.

Enter Trisha. She was a rare breed indeed. An intelligent, attractive 22-year old from little Rock, traveling with the  carnival, and with all her teeth intact. She took to me in much the same way as Inga did on the bus last month. I was one of the few heteros who would actually leave her alone while at the same time act as a flaming torch to the pack of red rocket dogs eagerly sniffing at her hindquarters. Along with Jimmy, the three of us quickly bonded.

Easter Sunday 2008 is, in part, why I'm sitting in the shadow of Devils Tower today. Jimmy invited us to his morning Chickasha ritual; what he described as "communing with his dead ancestors". Seeing it as an opportunity to leave the "hens" behind, Trisha and I happily went along.

Winter Quarters was directly across a small road from the Mississippi River. There happened to be a circle imprinted into the grass, and Jimmy arranged us inside then began chanting while Trisha and I sat respectfully quietly wondering what he was doing! This went on for some time. When he stopped, Jimmy said he had communed with The Ancestors (apparently that's not always successful), and that they had given us Indian names. Mine was Runs with the Wind. Thus, the name of the first blog.

Now, I agree with you cynics. You can find a performance similar to this at any number of the touristy "Indian Trading Posts" littering the west. What struck me was the gradual, then all-encompassing feeling of peace overcoming me while sitting beside the river. It was incredible. Something I had neither felt before nor felt since. With it came a sense of clarity that, for my indecisive ass, is invaluable.

I had the sense that I was indeed on the right path and that this "voice" was indeed what I thought it was. The three of us sat by the Mississippi all day. Just being. Trisha felt it too and that we were able to find calm in the Sea of Negativity was lost on neither of us, particularly when we left.

As soon as we crossed the road returning to camp, Trisha and I both said, at the same time, "Did you feel that change?" It was something akin to strolling thru a garden then stumbling out into an open landfill. It was that stark. I suspect it was what Steve describes as going from "awake to asleep" in Eastern terminology. I don't know what happened that day. But in a quiet, subtle, yet powerful way, it changed me. I wish I could give that experience away.

As I was sitting in New Mexico a week ago pondering Dennis, I thought of Jimmy. The similarities would not leave me alone and, as I thought of that day by the river, I again began to think about Devils Tower. I had the notion in July, but dismissed it in my pre-Dennis fog. I did some quick research and while I already knew it was sacred to natives, I had no idea why. Devils Tower was seen as a place of rebirth and rejuvenation. Several tribal leaders are still buried nearby and where young men used to come on their vision quests, the US Government now charges $10 for a "prime view."

Considering all that's transpired over the last 2 1/2 months, and looking 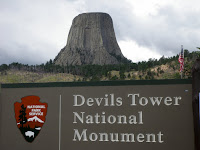 back to that Sunday on the Mississippi, this place of "rebirth" struck me as the place to start again. No, I'm not hoping aliens take me away. Nor, I should point out, am I on my own vision quest. I don't know specifically why I am here other than it "seems" right, to borrow Chris' phraseology! If the patterns hold, I suspect that will become clear enough soon enough.

To close Jimmy's story, I spent another week with them. The night I left the group, in Baton Rouge, he was drunk and making no sense other than I "shouldn't leave." In retrospect, now, this echoes with a haunting familiarity. But, as with Dennis, I knew better.

I found out a week after returning home that Jimmy had been beaten up, and had left too. I have no idea what became of him.
Posted by Todd X at 6:09:00 PM