We got an early jump on Sunday thanks to Mother Nature. Thunder woke me from a light sleep and, rather than continue sleeping and break camp in the impending rain, 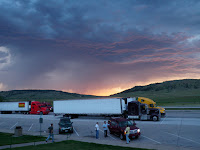 we chose to hit the road at 6am. Before running into Leslie & Bonnie, my intentions had been to go south from Spearfish to Deadwood, then further south thru the Black Hills and toward The Badlands. After hatching this little plan, I learned from Shelly that our father planned to be in the Hills at about the same time then on his way to Arizona. I loved the coincidence, but made no effort to connect with him in favor of leaving it to chance. How things have changed in 2- months! Bypassing Deadwood killed that possibility, but with no regrets. I have done enough. Plus, leaving the Black Hills unseen would give me something to see later.

Back on I-90 and thru Sturgis, we stopped off in Rapid City for Leslie to pick up buffalo meat for her mother as a thank you gesture for the use of her car. I already felt good vibes from South Dakota, and they got better. As we would ask about places that were open on an early Sunday morning, it seemed everyone was eager to help. 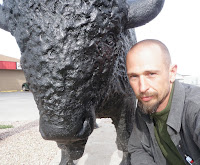 Further east past The Badlands, we all settled in for the long ride across South Dakota and the conversations continued. It's rare to ride with someone and have so much in common. None of the conversation was forced, or worse: bogged down by uncomfortable silence. Some rides reach this point after 10- minutes!

Our chats were at times intense, and always three- sided. Bonnie continued to show herself as someone who is passionate about making a difference with her life, and on a quest to find the best means to that end. As we debated the merits of different ways to proceed, I naturally encouraged an avoidance of institution. 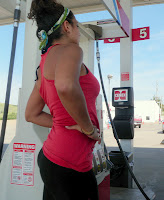 Whenever organized charity is invoked, my mind snaps back to my volunteer trip to New Orleans in 2005 following Katrina. This was the beginning of my personal exodus from Kamp Liberal. I saw the corruption and resulting ineffectiveness of organizations like the Red Cross, while at the same time seeing first hand the cancerous infestation of personal, dogma- driven agenda into relief work. Rather than concentrating on the task at hand, many (not all) of these "Progressives" were chiefly interested in pounding their chests in self- righteousness; proclaiming themselves noble carriers of the Evolutionary Torch. 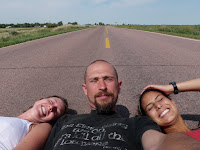 "I'm volunteering in New Orleans AND I'm a vegetarian (lesbian, socialist, PETA member, Democrat, environmentalist, pot head...) too!" It was repulsive, and a harsh lesson in how factionalism will manipulate any situation to promote dogma and further agenda. The Red Cross is The National Charity, and has exploited our sympathies borne out of tragedies like 9/11 & Katrina.

This is not out of humanity, but to turn a profit while in turn offering little tangible help. Don't believe me? Turn off the TV and go see for yourself. No one I talked to anywhere near New Orleans in the weeks following Katrina had any respect for FEMA or the Red Cross, despite the propaganda.

I continued to express my belief that the way to have the greatest effect is as an individual; quit 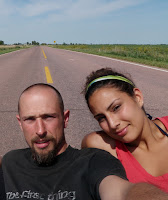 talking and see with your own eyes where you can help. If you want to get involved, writing a check is literally the very least you can do. It usually offers only the illusion of help; a substitute for actual involvement. "Charity" is oftentimes big business, and donated money is used to grease its machine; a blatant oxymoron.

With this as our soundtrack, our goal was Mitchell, home of the Corn Palace and a small town where we would begin plotting our route north to Carthage and Chris McCandless' bar. 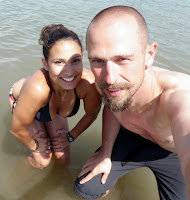 We stopped for a quick, impromptu bath in what turned out to be a lake apparently created by damming the Missouri River. Then, it seemed that we each retreated into our own thoughts, listening to music and watching the countryside. Leslie in particular seemed deep in thought, and I would occasionally catch her intently looking at me in the mirror. I wasn't sure what she was thinking, but would find out in Carthage. 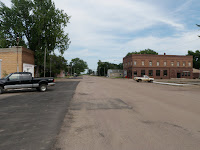 Carthage is barely a town, with a grand total of something like 187 people. When we stopped for pictures at the city limit sign, there was a sense of accomplishment. I had conceptualized coming here for a beer well before leaving in 2008, and here I was.

The Cabaret was featured in Into the Wild, and 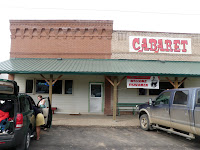 Sean Penn had brought the cast and crew to South Dakota to film. McCandless was picked up by a local, Wayne Westerburg, while hitching in the area and found work on his farm. They became good friends, and McCandless spent a significant amount of time here, even returning to earn money prior to his fatal trip to Alaska in 1992. My draw to Carthage had never been clear, beyond thinking it would be neat to have a beer as a sort of toast to his memory.

The Cabaret is exactly as it's seen in the movie, and by far the busiest place it town! 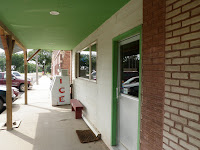 Walking in, the first thing that struck me was how they embrace the media- created tether to Chris McCandless. I was curious rather the locals would resent Into the Wild Pilgrims, but the first thing seen is a sign for a beer special called "The Into the Wild!" Inside, it's a typical dark, small town bar except that it's quite nice, clean, and frequented by older folks on Sunday afternoons. It struck us as a place that is probably packed on weekends; the only place to go!

We settled in and ordered our $1.50 beers, and I periodically found myself lost in the realization that I was seeing, and on some level had experienced, a few of the same things as McCandless. 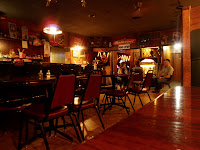 Life on the road has had its priceless rewards; Leslie & Bonnie were an at- the- table reminder of this! Also, I could see how McCandless could become attached to this isolated little town and its friendly people. It seemed there was no bullshit to be found, just real, friendly, authentic people.

I quickly snooped around the Cabaret's empty nooks and crannies, taking it all in. There were pictures of Vince Vaughan, Sean Penn, and 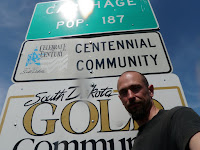 Emile Hirsh posing from various locations around the bar as well as original memorabilia from "Alex" McCandless including a newspaper article. I decided against buying the Cabaret's Into the Wild t- shirt, but seeing it answered my question about how they felt about their most famous patron. He was drawing people, like me, from afar and making them money. I believe Bonnie asked a very poignant question: How would he feel about that?

Our stay in Carthage was brief, just long enough to drink a few cheap beers and ultimately discover part of what Leslie was pondering through the South Dakota farmland.

She wanted to come with me...