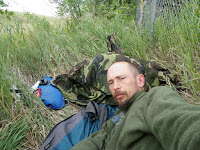 I was amused with myself as Friday began.

It was not so much with myself generally as much as remembering the impatience that a year ago was such an annoyance. As fun as it is for me to watch others, I often get as much entertainment from my own quirks. The fact that I was starting the day still unconcerned with when I would leave Glendive stood in stark contrast a not-so-distant past!

I was happy to settle in for the long haul and take advantage of the idle time to bring the still behind blog further up to date. 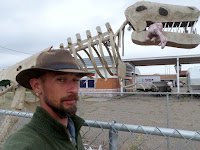 Cars, trucks...and cops...continued passing by smiling and waving. Friendly folks these Northerners! I returned the greetings, while continuing to type away for a couple of hours, until I looked over surprised to see an early 90's Chevy Cavalier stopping. John & Monica were driving from Glendive to Billings to replace the seat belts their dog had mangled. They were involved in a serious conversation about their daughter, so for the first hour on I-94 I happily edited posts while watching the Montana landscape slowly become more rugged. Further west, the terrain began to remind me more of Wyoming and Colorado, and much less of Kansas & Nebraska. It seems silly considering I had only been away from them for ten days, but I was really looking forward to seeing mountains again!

John and Monica were a nice couple. Their daughter was apparently about to be released from jail, and John was chugging Busch non-alcoholic beer. At first, I thought it was actual beer and immediately thought about Doug, and the ride into Wyoming last spring. Monica quickly pointed out that it was n/a beer while John told of how he had been sober since January, when his drinking had nearly killed him. Alcohol abuse had triggered acute liver problems, and he had been helicoptered from Glendive to Billings when his liver failed. He then echoed Lonnie's sentiment, that only when someone's truly ready will an addiction have a hope to be truly cured. For him, no "treatment" program would have worked, and he knew it. He needed the extreme threat of losing his life in order to stop. Unfortunately, some never get there, and in the meantime spend barrels of money looking for the Magic Addiction Bullet; the external cure that slays their demons for them. The similarities between John and Dennis were obvious, although I didn't mention it to John. I spent awhile thinking about how Dennis and John's stories, so similar on some levels, ended so differently.

I was happy for John, and there was a certain aire about him that indicated he was happy about it too! He and Monica were fun to watch, and if you were judge them on first impressions and appearances, you would miss something quite special. They were still happy and grateful to be with each other after years of marriage. Playful. Like kids. I wondered if the sight of death in the room had made them appreciate what they had and perhaps allowed them to enjoy life just a bit more. I never asked, although if I were to see them again I would. They were heartwarming to watch for three hours.

With Billings, I-94 was ending, and I was reunited with my old friend I-90. We traded warm goodbyes, and I immediately began to initiate plans that had been on hold due to uncertainty. 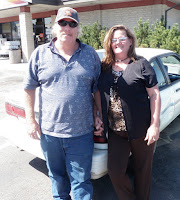 Michele and I had originally met thru this blog, and we had exchanged a couple of emails via Facebook. She struck me as someone I'd enjoy chatting with, and I loved the idea of meeting someone who had contacted me by randomly finding my webpage. That was how I had met Chris after all! This ultimately led to an invitation to alert her if I was near Great Falls or Helena so we could meet. My southerly course change complicated things, as had a rare case of Geographic Ignorance, but Michele said that if I could get to Bozeman before she left to cabin sit, she'd motor down to say hi. I had about three hours to at least get started on that 100-miles, so I made up a sign, and scampered over to the I-90 ramp with an uncommon of sense of urgency. We traded text messages over the next few hours and after she extended her deadline from 6 to 8pm, I cautiosly hoped that this would work. It didn't. With 8:00 came the realization that I would be spending the night in Billings. We both expressed disappointment, and went about our lives with a promise to get in touch if I were near Bozeman or Butte.

After twice dismissing an 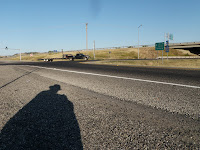 annoying, drunk panhandler who appeared to both want to be friends and live forever under the I-90 overpass, I'd had enough of Friday. I made my way to the closer truck stop, bought cheap McDonald's as a treat, and began to write and drink coffee as my phone charged. I chatted with some truckers, watched people come & go from the casino, and politely refused yet another offer of food.

As midnight approached, I had yet to scout sleeping accommodations, but had little trouble finding a spot behind the trucks concealed nicely by a short fence. I had a nice chat with Chris, rehashing recent events and learning that he intended to finally set off from Denver for Seattle, sans Penney and Robert, on Monday. We both chuckled at how ironic it would be if we found ourselves in the same spot sometime soon, since our trajectories both seemed to be directed toward the same general part of the country...

An editor would call that foreshadowing.
Posted by Todd X at 5:12:00 PM