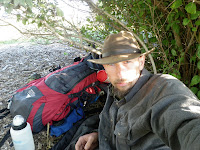 Awaking relatively early because of the lake of concealment, I took some time at nearby gas station to have some coffee, look over the atlas to get my bearings, and begin plotting a general course. I would be "actually" hitching an interstate, now I-29, for the first time since last August.

It didn't take long to get moving. After a brief wait, I found myself on the way north to Watertown with Steve, a 40- something, professional looking grade school gym teacher. At first, he was quite reserved, but as is usually the case, we found quite a bit to talk about when I feebly attempted to explain why I was out there. Steve had taken a western hitching trip years before, had run out of money in N. California, and had stopped to pick apples with migrants; he got it. There was then yet another nice political/social conversation and before I knew it Steve was dropping me at the extravagant truck stop in Watertown.

I had run into one of the common "professional hitchers" during my stint in Sioux Falls the night before, and there was another in Watertown. He was panhandling and had apparently raised enough to get a cheap hotel and avoid the rumored rain. He was overly friendly, and immediately offered me the floor of his no doubt luxurious accommodations, but I didn't trust him and wanted to keep going anyhow, since it was by now just barely afternoon.

I got a good indication of my immediate future when Howard stopped after 45-minutes. He was around 50, and had a memorable red tattoo of Charlie Brown's Woodstock character on his neck, among many others. He looked like he had experienced some history, and raised Hell doing it! Howard had intended to head the 30-miles east from Watertown into Minnesota, but took the interstate instead when he spotted me. I'm still always amazed that people will turn around, or alter plans for me.

Howard was an interesting study in contrasts. He had indeed found a great deal of trouble in his youth with drugs and alcohol. He had gotten it together however, and was now involved with his church, even going on a relief mission to Haiti. The way he spoke of religion resonated with me and, again, reminded me of Randleman. He despised "loaded" charity and before the Haiti trip had told the church he would NOT be recruiting new Christians while there. His philosophy was that only once you help feed, clothe, and shelter people, are minds truly opened to these abstract ideas. That generated an enormous amount of instant respect from me. He went further by sharing that once there, he had repeatedly left the frightened church members behind at camp and actually gotten out alone to get to know the people while he was there. One anecdote he told was about how he was being approached by a group of young Haitian men carrying machetes. Initially thinking the worse, he had his own "Vern Moment"; they were returning from work in the sugar fields, and wanted to say hello.

Howard was now in the process figuring out a way to open a dive shop in Haiti. He wants to transfer tourist money directly to the people who need it, eliminating the middle (charity) man. Howard was one of the most well rounded people I have met, hitching or otherwise. He had experienced things most of us can only imagine, mostly self-inflicted, but came out the other side as a conscientious, pragmatic, grounded human being with a developed sense of clarity that I wish I had. I also wish he had Internet, because I would have loved to stay in touch with him.

Howard's exit happened to be US-12 in Summit, SD at an 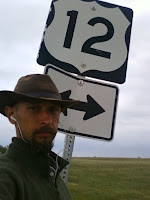 old Sinclair truck stop that looks completely out of date. After some coffee and a brief dodging of raindrops, I was visited at the ramp by the first cop on this part of the trip. He was just checking up on me, and didn't bother running my ID after asking a few questions, and making sure I knew I was fine as long as there were no complaints. Why can't they all be like that?

There was little traffic at this spot, so I prepared myself for the fact that this may be an Idaho kind of wait. I even began to scout places to sleep, but after 90-minutes a young man in a big pickup stopped.

Joel was an organic farmer from near Wood, SD

and on his way to Grand Forks, ND on business. My sign read "Fargo" because I had yet to decide how far north to go, and knew I-94 ran thru there if I decided to turn west. Almost as soon as I was packed in the truck, Joel offered a ride all the way to US-2 in Grand Forks, if I wanted it. Without much thought that was that. I would be in Grand Forks that night making another big left turn. And, this would be the furthest I had ever hitched in a day that didn't involve truckers!


Joel was the perfect followup to Howard. He had recently crashed a huge piece of farm equipment into an overpass, and had made all the Dakota TV news channels in the process! He was on his way to Grand Forks to look at replacements, and was possibly going into Canada if they weren't suitable. He told some remarkable stories about life in rural South Dakota, reminding me of the old west in the process.

For example, when a young man had gone missing in the dead of winter, he had gone up in a plane as part of a search party. It turned into a recovery effort when they found the body. He told how it was 60-miles to the nearest grocery store, and 100 to the closest Walmart making self sufficiency a necessity.

Law enforcement and other state services are apparently of little use to them. They handle trouble themselves and work together in times of need. For example, everyone he knows is a "volunteer firefighter" and they rely primarily on themselves to plow their roads in winter. Many people share disdain for government interference, but Joel and his neighbors seemed to go beyond that. They appear to have found a way to simply marginalize it by eliminating the need for, and dependence on, the Daddy State. I was getting the confirmation that this was, as expected, the predominate theme in this part of the country. And I, as expected, liked it.


Joel had told me of another farmer he knew of up toward Buxton, ND that he described as a kind of McGyver character.

As Joel described him, Don Dufner had build some sort of a famous Frankentractor: three huge tractors combined and customized into one huge machine. Joel told how Don would take this beast to tractor pulls, and dominate. He also explained how he was a whiz at restoring antique John Deeres, and had barns full of antiquated farm equipment. Shortly after crossing into North Dakota and passing Fargo, Joel suddenly asked if I wanted to stop by unannounced and see for myself. In a flash, we 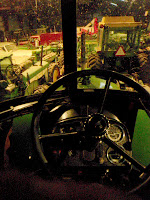 were flying down narrow North Dakota farm roads in search of Frankentractor's Lair! Joel hadn't seen Don in a couple of years, and wasn't sure he would even remember him. This reminded me of the old days in Hillsdale, and I was curious to see how Don would react to this unexpected evening call from two perfect strangers, and to hopefully see his barn full of toys.

Joel did not exaggerate. Don did not disappoint. 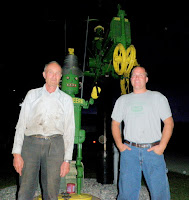 He still works his nearly 10,000 acres full time, and speaks with that slow, northern Minnesota accent. Despite the fact he was still working in the fields when we arrived and didn't remember Joel at all, he happily welcomed us in and took us straight into the barn where his monstrosity was caged. I am not generally impressed with monster trucks or tractors, but this thing was fucking incredible, especially considering he had done ALL the custom work himself and it looked to be off the John Deere assembly line. Joel reiterated that there was You Tube video of Don in action, 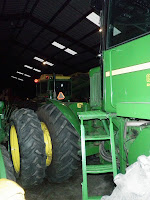 and after climbing inside and taking a quick look at his collection of tractors that went all the way back to the Depression, I saw on his wall more than 300 tractor pull trophies.

While the craftsmanship was obviously impressive, listening to him talk was nearly as much so. Don was an old- school farmer who loved tradition and could do anything with any equipment. As Joel pointed out later, this is a guy whose tutorship would be priceless. When we left Don's, I was beaming. That was something out of Charles Kuralt, and I was quite happy to have seen that small piece of hidden North Dakota.

We passed a sign for Winnipeg, Manitoba just before we

arrived in Grand Forks and it blew my mind that we were barely 100-miles from this Canadian city. It put into contrast just how far north I had come. US-2 had been a route I had had my eye on forever and now I was climbing out actually on it and thinking that even if I wanted to I couldn't go much further north! And oh!, I thought about it!

Joel had turned out to be one of my more interesting rides, and I was again sad to see him move on. The last three days had been a flurry of interesting people and experiences and after scouting out both truck stops at the intersection of I-29 and US-2, I decided to slip into the bar located at one to celebrate. After everything, this day still wasn't over!

I "planned" (HA!) to have a solitary beer and relax before wandering around back to find the night's nest. Before long however, I was involved in a conversation about music, sociology, and American/Canadian politics with "Fish," a big jolly, trucker from Winnipeg. One beer turned into four, and my happy little stay at this blue collar truck stop bar ended with a Prairie Fire, courtesy of Fish. 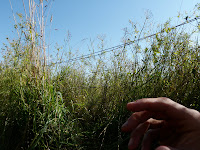 A Prairie Fire consists of tequila, Tabasco sauce... and one hell of a buzz! Not long after that, I was wobbling toward the back of the truck stop then walking headlong through tall prairie grass. I was at full drunken gallup when I met a wire fence that was exactly waist high. The backpack made me top heavy so, before I knew what was happening, I was tumbling over the fence head first! I expected to bust a shoulder or an arm because of the weight landing on me, but found the landing to be surprisingly soft thanks to the tall grass.

As I lay there laughing at my own idiocy, I summized that if it was soft enough to fall in, it was good enough to sleep in. For once, I didn't waste an hour looking for the ideal spot; I had literally fallen into it.
Posted by Todd X at 10:33:00 PM