My nest behind the hotel in Sidney was tenuous, but suitable. It offered barely enough concealment from the bridge, and was precariously close to the hotel parking lot as well as what looked to be an open field that held someone's horses. I've learned that when I am in a spot like this, I typically only half-sleep. Then, at first light I am immediately up and out to minimize my chances of being seen, so Thursday morning I was negotiating the tall grass and gullies by 6:30, as soon as there was enough light to see.

I instantly crossed the road for gas station coffee, which the cashier would not let me pay for after seeing the pack. I was still quietly shaking my head in amazement as I set up next to the busy morning traffic hoping for a ride the 50-miles south to I-94. Tracey made sure I didn't wait long. He and Justin were on their way to work in Glendive and, after a quick 15-minute wait, I was assured of my reunion with the same I-94 I had considered back in Fargo.

Tracey looked to be in his early 50's, while Justin was a young pup of about 22. They were insulation installers on a long commute from Fairview to Glendive. Justin said little, other than to comment on something Tracey would say, but that was fine. Justin reminded me of an apprentice under Tracey's tutelage. Tracey liked to talk and was interesting to listen to. He was quite cosmopolitan; well versed in all things Montana and plainly had a firm grasp on the skills needed to survive. He was fiercely proud of his military service years before, and had a special dislike for politicians, businessmen, and of course, Californians. This was beginning to develop into an unexpected theme. It was apparent that Montanans are intensely protective and proud of their part of the world; God's Country, as Tracey called it more than once. He and many others resented wealthy, liberal Californians migrating to Montana just to gobble up cheap land for development and the Californication of Montana's politics.

Tracey dropped me off at a dingy, yet strangely elaborate,

Sinclair truck stop about 1/4 mile from I-94. I had slept with my boots on, in case I needed to bug out so, combined with my foot being wet from last night's encounter with hidden caverns, I could feel the telltale signs of developing trench foot. Off came the shoes and socks in favor of the slip-ons, and in to the diner went Todd for an 8am omelet and some writing.

The weather continued to be ideal, so by 10 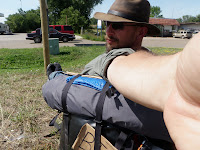 I had relocated next to the road as the updating continued. I was flying a sign for Billings, just in case, but was content to just relax and write. By noon, I had finished the blog posts and had returned inside to inquire about a payphone to upload them. Apparently, the manager of this shithole took exception to my presence, making it clear that once my call was finished, I was expected to vacate the "exclusive" truckers lounge. Their idea of luxury is apparently,a tiny TV tuned to Fox News and two fewer flies than the men's room.

Naturally, I sat down, next to the one working payphone, and re-edited the posts. Not that they needed it, but to be antagonistic. 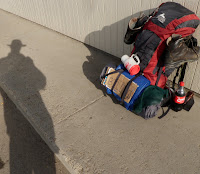 Mr. Happy walked by several times to check on me, saying nothing in response to my inviting glares, and after the posts were finally sent I resolved to take my meager coffee & food money to the Conoco station, which was much closer to the freeway anyhow. As I left, I bellowed an inappropriately loud, insincere, obnoxious, "Thaaaaanks!" while noticing that this fat, squat little "Lounge Nazi" was working hard... on his Yahoo Fantasy Baseball team! I almost suggested that perhaps his time would be better spent plunging the backed up, fly-infested toilets. I was not a fan of this greasy, swarthy, little troll. Have I gotten that point across? Sometimes I understate...

Soon enough, I was at the much friendlier Conoco station, and then at 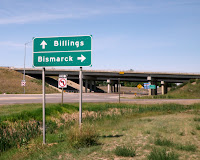 I-94's ramp hoping to get toward Billings, 225 miles west. Tracey had dropped me at the truck stop because of my commentary on ID checks, and there was a Montana Highway Patrol outpost located literally a stone's throw from the exit. But, ultimately I decided that it may work in my favor. Actually planting myself beneath their noses, the last place a fugitive would inhabit, might keep them away from me AND encourage people to stop. As the afternoon turned to evening, I can only assume I was correct. Several officers drove by offering only friendly waves rather than suspicious interest.

Afternoon became evening, and as evening became night I found a perfect spot to camp in tall grass,

behind small trees, and next to a fence 30' from the ramp. I had a nice, long, philosophical chat with Leslie under a star filled sky with satellites and shooting stars sailing by. Despite the fact I had only gone 50-miles and gotten one ride, I felt a calm contentment. I was fine being exactly where I was, and had a quiet confidence that things were exactly as they should be.