The weather gods were cooperative. Shortly after I made my way from the bus station to the adjacent gas station the rain stopped.

It felt bizarre stepping out into Gillette. Wyoming had been a challenge in 2008, and I was a bit unsure of my prospects for a ride. The woman at the bus station had told me hitching was illegal in Wyoming as she pointed me in the direction of I-90, so with no frontage or state road, I needed to find a truck stop. Just like Rawlins.

The sun finally came out as

I made the quick walk to the Flying J next to the interstate, and once there I fell into routine: plop down and wait. Soon after I settled in, I was briefly joined by another hitcher who was (proudly) of the opinion that minorities were the ones responsible for the evaporating jobs. He was nice enough, obviously because I was white, and thankfully he quickly decided to head to the on-ramp after a cup of coffee.

I had held faint hopes that since 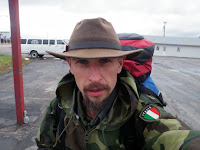 I was getting started so early I would be able to make Moorcroft, and perhaps even Devils Tower on this Wednesday. It took less than an hour to get on the road to both.

Harry and Dustin were from Washington and on their way to Jacksonville in a small, loaded down pickup. As Harry and I performed the inconvenient process of rearranging the truck to accommodate me, he quietly pointed out that any "treats" would be appreciated. I had no idea what the hell he was talking about. I prayed he was not obliquely asking for sexual favors in exchange for this 20-mile ride to Moorcroft! If so, he was in for a huge disappointment. But as it turned out, to my relief, he just wanted pot. Of course, I had none so I agreed to give him a little money instead. That seemed worth it to get closer to the state line!

The conversation to Moorcroft was interesting. Harry had a self-published book on

Amazon, and correctly guessed that I was writing when I told him I lived in Santa Fe. I'm not sure what bothered me more; the "progressive, liberal, artist" cliche about moving to Santa Fe for "inspiration," or the fact that on the surface it appeared I was perpetuating it! I took no small amount of joy in pointing out that I drew my "inspiration" by LEAVING Santa Fe, for places like Gillette no less! Draw whatever you like from that.

As we continued toward Moorcroft, I learned that Harry & Dustin were actually moving to Florida with nothing but $500 and motivation. 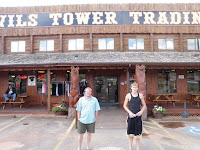 They were planning to camp and look for work once there. The thought that he may be working me for cash entered my mind, but I was inclined to believe him and figured that if true, I could help them out a bit in exchange for a lift the rest of the way to Devils Tower. If he was working me, hell, at least he was good! After a quick negotiation, we were through Moorcroft and on the small road that leads to the National Monument chatting about religion and politics. I believe he liked my "to hell with all of them" political insights.

Thirty miles later, we pulled into the Devils Tower 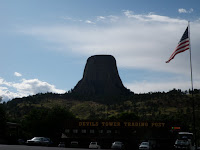 Trading Post in the shadow of this place that 400-years ago was the most sacred of grounds to various area Indian tribes. Now? It's recognized as "that place from Close Encounters." It did not disappoint at first sight, and you can see how in the age before high-rise buildings this place would be awe-inspiring.

Devils Tower has been on my list for a long time, but not due to Stephen Spielberg and Richard Dreyfus. A bit more back-story may be in order...
Posted by Todd X at 2:43:00 PM