When Leslie confided to me at the Cabaret that she was seriously considering joining me for a week or so I was stunned; it came out of nowhere. At first, I thought she may be just batting around abstract fun-thoughts, but the look on her face quickly showed how serious she was. Immediately she began running down a laundry list of things she needed to do and, judging by the detail, she had been putting much thought into it. I was flattered by the trust. Considering that she had known me a scant 24-hours and would trust me enough to wander off to parts unknown was touching.

In the moment, I was excited for her. Through the conversations we'd had there had been an obvious budding connection, although I was clueless to where it was going. It began to seem to me that my simple presence and the exchanging of ideas had stirred something lurking just beneath her surface. To my recollection, I had not implied that my particular path was the one for her, but as we began to discuss the details, it became apparent that Brian's concept of mirroring had again been doing its silent work.

That now-frequently mentioned concept of synchronicity, serendipity as she prefers to call it, now came front and center. It was plain to both of us that there was something at play here. I could only assume that this was an instance where I was playing a supporting role in Leslie's drama. My feeling was that I was there to serve a purpose; not influence this particular decision one way or another regardless of my wants. All I could do was lay out a welcome mat, offer perspective, and answer questions.

Things felt decidedly different as we made sandwiches on the hood of the car outside the Cabaret. Events were now in an uncertain, exciting state of flux. We talked more, and I reiterated that I thought it would be great for her to tag along, but it was up to her. I loved that she was even considering it, and that she had the courage to explore the idea. In fact, I believe she would have agreed to go right then, but the problem was, understandably, going to be her family!

The road to Brookings and I-29 was quiet as Leslie re-immersed herself in thought trying to piece everything together. Bonnie wanted to get to Madison, Wisconsin to see a friend that night, so I told Leslie if she decided to come, I could ride along and we could both leave from Madison for a quick Wisconsin Wander. I liked the idea of adding Wisconsin and Minnesota to my list anyhow, and it would be relatively easy to pick up where I left off when she returned home. However, I needed to know by the time we reached Brookings about an hour later. If she went home, going any further with them would take me south, toward western Iowa. Not my intended direction!

Brookings arrived, and as we fueled up Leslie walked off talking on the phone. I began to scout the area for places to sleep, just in case this was it for me, and found the BP station quite suitable. All that was left was the verdict.

When she returned, Leslie said that she didn't think there was any way she could do this. She knew it was her decision to make in the end, but had enough respect for her mother not to. It's understandable for a mom to be a bit leery of her daughter spontaneously running off to travel--with a guy she picked up on the side of the road!

With that, things laid out nicely. We continued to talk about a reunion of sorts for the end of the year and I rode along to Sioux City anyhow, just to hang out another 45-minutes with my new friends. As we sped toward the reunion with I-90, it occurred to me that I would be talking about them in the same way I do the other stars of my travels. This had been two of the more incredible days to date, not to mention rides! 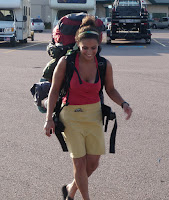 I was sad to be pulling in to the Flying J on the north end of Sioux Falls. The 30-or-so hours I had spent with them felt more like a week because of all that had happened, and that spoke volumes. We had as a group managed to hit Brian's "Flow." Leslie and Bonnie loaded me up with extra food and bug spray, we hugged, and they drove off toward their meetup in Madison. It was an empty feeling standing alone in the parking lot after all that had transpired. I immediately began the process of decompressing, adjusting to a new situation, and realizing I now had to formulate a plan. This Flying J, while nice, was not conducive to stealth camping. It was best to get moving. 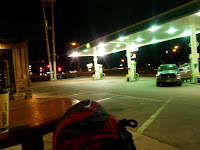 After gathering my wits, I drew up a sign for Brookings; exactly where I had just come from. Not 20-minutes later, I was in the pickup with Patrick. He was a no-nonsense kind of guy who professed to hate talking politics. He hated it, until he figured out we had similar "fuck em all" views toward politicians! Then, that was all he wanted to talk about! A great way to get me going again. 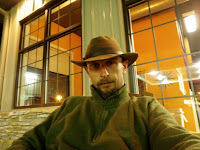 Patrick dropped me at the same BP station that we were at just a couple hours earlier. It was getting late and I'd had a long day, so before long I was scouring the bushes between the northbound exit ramp and I-29. I was quickly discovering that I would need to adjust to the scarce vegetation of the plains! I settled beneath a bush in a spot that offered barely any concealment at all, and was soon falling asleep with the thought that this had been a day that I would never forget.
Posted by Todd X at 9:45:00 PM