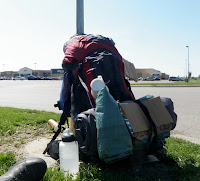 The notion of a couple hours of sleep was absurd. Traffic and an early morning damp chill conspired to keep me awake for all but 30- minutes. Before the sun was up, I was back at my spot, on a curb between WalMart and the truckstop. I hoped to catch a ride with someone on their way to work, or getting an early start on their way west into Montana.

As the morning progressed, I settled in to a relaxed, fatigued

routine and managed to catch a few energizing winks as traffic rolled by. Astoundingly, I shunned the habitual coffee trips, despite the lack of sleep, after drinking what seemed like gallons the night before. It also became painfully apparent that the "other shoe" I was expecting had indeed dropped. Williston was going be home for a while!

The weather was beautiful, with sun and temps climbing into the low 90's as I resigned myself to fate. I strapped on the headphones,

worked on the sunburn, and watched with curiosity the odd looking machinery going to and from the oil fields. I believe a year ago this would have bothered me. But now, I noticed a once- rare patience as I mentally snapped back to Devils Tower, and the resulting ride with Leslie and Bonnie. With time to sit came time to reflect on how every time I had been "stuck," things had, in the end, worked out perfectly. As if scripted. My Center of the Universe philosophy, that sometimes things need to develop elsewhere, echoed in my mind and helped me to just enjoy the day. And then, almost immediately and as if on cue, something remarkable began to happen; something that had never happened before. People began spontaneously handing me money as they passed by.

I was dumbfounded. To be clear, it was completely, absolutely unsolicited. The sign I was flying said "Montana." At first, the frequency made me VERY uncomfortable. People had on occasion offered money, but it was a very rare thing and NEVER from anyone I had not spoken with first. S 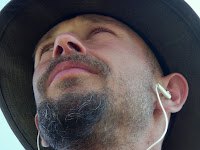 uddenly, there was a stretch of 3 out of 4 cars silently handing me five and ten dollar bills, then wishing me luck. I wasn't sure how to handle it. Then, I remembered the Indian from the night before and when I myself had given money to Harry. I couldn't explain what was unexpectedly compelling people to give me cash any more than I could explain those who have stopped because "something just told them to." I wasn't about to tinker with karma or fate. I could only conclude that maybe it was this mysterious cycle coming back to me; my time to receive. This idea naturally transitioned to, and added a new layer on top of, the Dennis- triggered idea of Karmic Give and Take. Seeing it transpire right before my eyes was remarkable, and gave me plenty to ponder as the afternoon quietly passed and a couple more gave money.

Incidentally, the out- of- the- way, spontaneous generosity of people was not limited to money. A retired couple from Raleigh, North Carolina spotted me from the parking lot, and walked over offering lunch inside their fifth wheel. It was perfectly timed; I was forgetting to eat again! They wanted to give me a ride too, but were delivering someone's truck to Boise and didn't feel right about it.

I found it richly ironic that people were giving me cash, but no rides! And, it that it would appear on the surface that, as dinner time approached, I was having a lazy, uneventful day. One of the odd things about this life, however, is that oftentimes the days with the least movement offer the most reward. It took me forever to accept, but it's generally a case of keeping your eyes open and mind tuned to receive the quiet, yet powerful lessons life can provide in seemingly mundane ways. Once you find that frequency, the peace it can provide is incredible.

With rush hour and a dramatic increase in the Halliburton trucks, came the acceptance that, for whatever reason, I was about to have my first full day ever without a ride. As though someone was toying with me, at precisely that time along came Rob. He was on his way home from work and this bizarre day would continue in Montana...
Posted by Todd X at 3:19:00 PM