With the confirmation that I was traveling, the captain of the boat invited

me aboard saying he could get me 20-miles up the Willamette River. As I was lifting my pack to climb on, Dave looked at me and said emphatically, "Todd, GO!" This was something Chris and I had talked about, and I was not about to lose to chance to hitch a boat, especially one going that far. This little jaunt to Astoria, or so I thought, was getting interesting!

Once settled aboard, the Captain 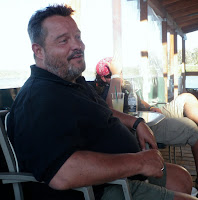 introduced himself as Andre. He was from the start a dynamic, forceful personality. The dreadlocked kid was Cody, and was from near Kingston, Ontario. The two had met earlier in the week at the end of Burning Man when Cody was looking for a ride to Vancouver, and Andre answered the random yell. 14-year old Javawn was also on board, wearing formal attire including a tie, that I later learned was his school uniform.

As we sped west down the Willamette,

Cody quietly yet emphatically impressed upon me how he had hit the Vagabond Motherlode; eating $90 steaks, having an I-Touch purchased for him after cleaning Andre's camper, living for the week on a yacht. Andre was obviously the richest, most generous man Cody had met, and he was openly riding the A-Wave as far as it would take him. I was unsure how that affected me, but he seemed to think that I was about to be swept up in it. I highly doubted that, and was happy to enjoy my ride up the river... to wherever.

Wherever turned out to be in Scapoose, at Mark's on the Channel;

a restaurant catering to the plethora of boaters and floating homes along the river. Andre pulled in, music blaring and to much fanfare, moored the Master Craft, then ordered me to leave my pack on the boat and follow along. Andre had announced that the trip out here was so that his nephew, Javawn, could take his first plane ride: in a WWII German Messerschmidt. Really? Really.

Andre was meeting up with Howard, who owned a construction company and was also a pilot. 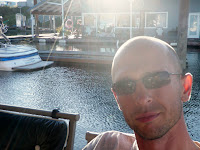 Javawn and Howard almost immediately disappeared, while Andre introduced me to Mark, the owner. It became apparent that Andre was a valued customer when alcohol and quiche- snacks began appearing seemingly out of thin air. There was no mention of money, and when I tried to verify rather I was expected to pay, Cody just winked and indicated to me to drink up. OK... I'm capable of that!

Pretty soon, we all heard the distinct buzz of the Messerschmidt, and were peering into the sky at what must have been an incredible ride for a 14- year old, or anyone. I continued to notice how Andre was treated; as though he were a captain of industry.

I also noticed that he was hobbled, as though by acute arthritis. But, the more he drank the better it seemed to be. The alcohol continued to flow and, as the buzz intensified, I had no idea what the hell was going on! Cody and I had struck up a conversation with "Mandela," a South African ex-pat who now lived nearby and works in finance. The three of us dubbed Andre "Dos Equis Guy." The most interesting man in the world.

Drinks continued to magically appear, and the night took the form of an obvious, extravagant party. 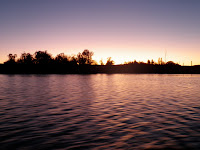 Andre, never shy about dictating, ordered us all back aboard the Master Craft; it was getting late and past time to get Javawn home to his mother! Mandela joined us this time, and without so much as a discussion, I was again speeding down the Willamette, this time back to Portland as (hopefully!) Andre's guest! If not, this would be a difficult, drunken stealth camp!

It was past dark as we coasted down this

river that divides Portland down the middle. With downtown immediately to the west, I marveled at this life. Waking in the weeds in The Dalles 12-hours ago, and now I was randomly partying aboard an $85,000 boat with Dos Equis Guy on a river in downtown Portland! And, the night was obviously only beginning.

Soon, Cody, who at 21 has no shortage of testosterone, requested women. Andre obliged. After a quick phone call, Lauren and Karen were boarding the boat from a dock downtown.

We all felt the need for more booze, so Andre docked the boat at a bar on Portland's southwest side. We were told they were closed, but Andre "worked hi magic" and they actually opened the place back up for him. Quite impressive, this Dos Equis Guy! However, the staff was openly annoyed by having to remain, so with an aire of indignation, we took Andre's money elsewhere: To Karen's boat to pick up gallons of rum and tequila!

By now, it was well into Friday morning, and after a couple more stiff drinks, fatigue began to catch up to me. Andre continued zipping up and down the 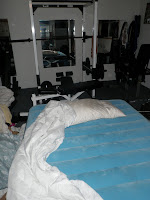 Willamette while I reclined and caught a few quick winks. Somewhere around 3 or 4am, we found ourselves at the Oregon Yacht Club and Andre's floating home. I caught a brief second wind, and had an interesting conversation with Lauren about her chosen field of study: Marketing and PR. Before long, I was inflating mattress in the "back tinder"; one of two spare apartments Andre kept behind his two-story floating home. As I drifted off to sleep feeling the slight rocking of the floating complex, I laughed out loud as I again thought about the progression of this incredible day. Weeds to multi-million houseboat. I love this life!


However, Friday (9/11), then especially Saturday would add texture and the slowly appearing back story of what I had been swept in to, and then the manifestation of what had caused the "Sit Down & Shut Up" feelings of the past few days. These are usually dramatic, though not quite to this level, and Andre's was a remarkable story indeed. His story went far beyond that of a rich tycoon who used Portland as his personal playground. His story, when disclosed, would make apparent that this was no random "chance-meeting" with a foundation of fun and frolic. Meeting Andre dovetailed perfectly with everything on this journey. I had a purpose here, and so did he.
Posted by Todd X at 9:13:00 PM