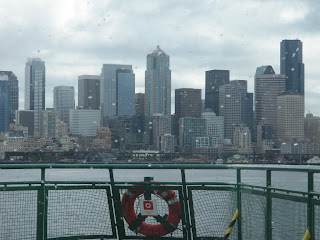 to Seattle was surreal. When I called Shalain and gave the all-clear to purchase the ticket, it finally hit me that this intense phase had ended, and it a couple days I'd be back in familiar surroundings, being mauled by my cats. Nagging regrets lingered, but I was OK with it. I was mentally spent, needed a break, and would see some interesting (and new) parts of the country on the way.

Wendie's predictions were in fact accurate. I got to see some of the city, albeit from the backseat of a cab, and was surprised at how much I actually liked it, reminding me a little of both San Francisco and Denver. The $8 cab got me to Seattle's shithole Greyhound terminal with 45-minutes to spare, and before I knew it I was nestling into a window seat on a nearly abandoned 1:15 bus and riding right back down I-5 toward Portland. I had honestly hoped that I would meet some interesting people, but all that was offered was another backpacker... with a demeanor that made me want to beat him. Rather than petty violence, I settled for my Mp3 player. Following stops in Tacoma and Olympia, I found myself back in Portland for a 90-minute service layover.

Portland felt much different from this vantage point! As I crossed the Willamette into the western section of downtown, I gazed at the river and laughed out loud at the realization that only a week ago, I was boating beneath this same bridge with Andre. Now, I was re-entering the city less a conquering vagabond- via the least glamorous mode of travel I could think of other than the back of a patrol car! It was quite odd! Despite my time there, this was the first I'd seen of the bus station, and was rather impressed: it was the Taj Mahal compared to Seattle! Clean. Modern. Didn't smell like pee. I considered calling some of my new friends while I was there, but it felt like overkill. What was we going to do with an hour? I settled for a short walk, a pack of cigarettes, and putting a charge on my phone. Leaving Portland on I-5 south took me within sight of the Oregon Yacht Club, and Andre's house. I hopped across the aisle to take one last look at the floating home, the Master Craft, and the spot that had held so much intensity the previous week. Believe it or not, it was more nostalgic than August when I retraced the route I had traveled in Idaho more than a year ago.

The sun sinks early out west, and soon enough I was sleeping the rest of the birthday away. Aside from a quick stop in Eugene, the rest of the night... and most of the trip to LA... was the standard Greyhound experience. We passed into California and I remember hearing an announcement for Redding but didn't bother to open my eyes, let alone get off the bus. Sacramento was my first transfer, early Sunday morning, and being spoiled by the empty vessel ended abruptly with this over packed Los Angeles express!

Central California is nothing to fawn over, however once you get near LA and begin crossing the mountains, it becomes quite gorgeous. The western side of the California mountains (the areas that will be swallowed by the Pacific) have always exceeded my curiously low expectations... with the exception of the Los Angeles cesspool. As we passed through Hollywood, I began to see familiar, iconic sights and signs... like the Capitol Records building and Melrose Place. Now, that's some culture!

The 3-hour Los Angeles layover was the part of this bus trip I was dreading! The last time I bused through 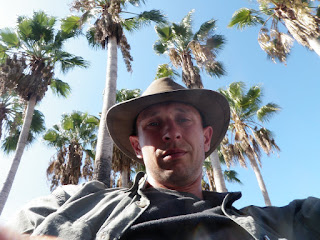 LA, I was 14, and we had our luggage stolen from the downtown terminal. I naturally assumed (since it was Greyhound) that little had changed and we were headed back to the same spot. I was pleased when we bypassed downtown altogether and pulled into what can only be described as a "compound" on the south side of the city. The terminal is the most secure I have EVER seen, complete with cameras, fencing, razor wire, automated bus gates, and a security checkpoint that is closer to airports than Greyhound... which generally has NO security whatsoever. The LA station was quite nice after all!

The highlight of the ride same in San Diego and was a nice elixir for the mental upset I had experienced about ending this early. I finally got to meet my friend Amber. 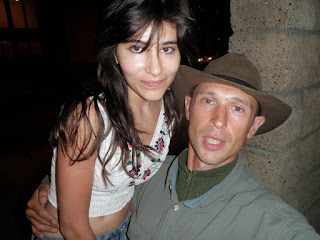 I had called after leaving LA, told her my bus was stopping for a short time, and that if she was free it would be great if she stopped in to the bus station so we could finally meet face-to-face. Amber happened to be downtown having dinner, and walked in shortly after the bus arrived. It was nice to see an actual face, and we quickly discussed possible, theoretical travel ideas down the road. I was curious to see if the vibe was the same in person as it had been via Couchsurfing and email. Indeed it was, and the possibilities of someday traveling with her seemed encouraging. San Diego and I seemed to agree with each other. It was one of the last cities that I hadn't seen, and wanted to. Although I didn't get a chance to explore, I liked what I saw and want to return. Soon!

Sunday ended on an interesting note in Calexico, California which, as you can no doubt guess by the name, is ON the Mexican border. I assumed we would get within a mile or two, but the stop was literally within sight and a stone's throw of the checkpoint. Looking for ways to entertain myself, I took a small amount of joy in that I had essentially gone ocean-to-ocean and border-to-border since April. 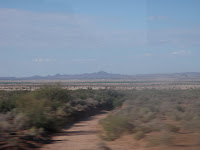 This little side trip was also practical & useful because it was quite close to the Salton Sea, Niland, CA: Slab City. Chris and I have discussed The Slabs numerous times as a possible joint-destination over the winter and this gave me a chance to see the landscape first hand for the first time. I was also privy to numerous Border Patrol ID checks. Along I-8 and I-10 close to the border, Border Patrol would stop the bus, come aboard, and demand immigration papers/ID. They also pull random luggage from beneath the bus and let their dogs go to work. In addition, the highway was blanketed with Border Patrol SUVs shining spotlights into the desert hunting illegals. It was a bizarre experience, but in retrospect should have been expected. 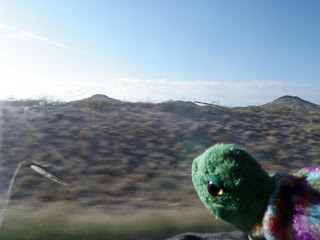 and the last 200-miles up I-25 to Albuquerque. I slept the entire way, but only after learning my father was nearby in Alamagordo on vacation with his RV. I found it putridly ironic that someone I had never met before would meet up with me (Amber), but my own father wasn't approachable. It was a quick, bitter realization, but an important one. I believe that book finally closed for good when I came up with a new moniker for him: Ward. As in Cleaver. Daddy of the Year!

From Albuquerque, I caught the New Mexico Rail Runner 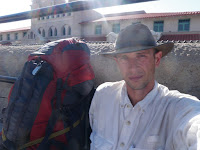 commuter train for the last 60+ miles to Santa Fe. This was the first time I had ridden it and highly recommend it to anyone traveling from Albuquerque to Santa Fe. Greyhound had appeared to eliminate their stop in Santa Fe, but I was happy to wait the extra hour to take the train! We later discovered that the bus still stops here, but there are no schedules listed on their website. That's fine, maybe having to take the train to Albuquerque will keep me off Greyhound and out of Denver?

I finally arrived home at around 6:30pm on Monday, 52-hours and a world away from Seattle. What happens next was anyone's guess but along with quiet, yet frantic decompression, the preparation began almost immediately.