Riverfront Park and I liked each other! 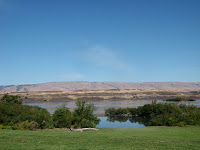 I immediately made my way to the shore of the Columbia River and, looking across to Washington, thought about Lewis and Clark. I had gotten my first glimpse of Mt. Hood the day before, and was continually amazed at the intense beauty of Oregon. My kinda place.

I sat on the ramp for a couple hours, but as dusk approached I knew I needed to get back into the park, which was Day Use only,

and find a place to hide for the night. I was tired, and had begun getting frustrated at a perceived lack of drive and vision. I held the "Sit Down & Shut Up" idea close, but when I am fatigued I tend to get bitchy. As I dozed off in a perfect, soft spot just off a nature trail adjacent to the park, I was wondering what the hell I was doing. I also knew I needed sleep! Sleep, as it turned out, would not be a problem. 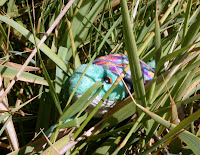 The grass was at least 4ft. tall, which made for something of a mattress beneath the bivy, and I slept uninterrupted for nearly 12-hours. We had crossed into Pacific Time the day before, so the sun set an hour earlier. Getting to sleep at 8:15 gave me a great jump on a monumental Thursday, and had also given my psyche a colon cleansing. I was tuned-in, present, and excited about where I was. And, I should have been.

I was noticeably relaxed as I set up a little day camp on a picnic table. 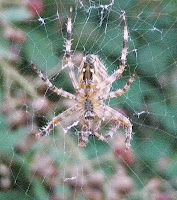 All I wanted was to relax and enjoy a morning next to the Columbia. Logic said I should get my ass to the ramp and try to take advantage of the early start to get thru Portland, but my intuition was telling logic to go fuck itself! I decided to side with intuition. I fully charged my cell batteries, repacked the pack, ate, shaved, and just...was. It was phenomenal!


Around noon however, being still present, I noticed a shift. It was inexplicably time to change locales and get to the ramp. I followed without question, and spent the next 90-minutes writing before a small SUV suddenly appeared from nowhere. Let the festivities begin.

Zeno was a middle-age, pony-tailed former UN artist. Yes, an artist that worked for the UN, and on his way to pick his daughter up from the Portland airport. He was also one of the more fascinating rides ever, and set the tone for the rest of the day. Zeno had been wildly successful with the UN, and had traveled all over the world. He found himself on the floor of the General Assembly with regularity, and met numerous diplomats and world dignitaries. Zeno had also given all that up when he discovered he had a daughter who was in her early 20's, and moved to The Dalles, just to be near her. The transition had not been easy; his artwork was being held hostage because someone felt his quitting was, somehow, a breach of contract. His assets were frozen, and this man who had made a fortune was now scouring for work at places like McDonald's. It was odd to hear a well spoken, articulate, worldly man give an educated dissertation on Syria, then tell of applying at Burger King! After a short time, I greatly admired Zeno. He was a man of conviction who followed a distinct sense of right; "career" be damned. The conversation eventually transitioned into how to make money while traveling, and he was a gold mine of insight and information. Taking notes, I soon had a page full of avenues to follow. Avenues such as how to work guarding workers from bears in Alaska, and traveling to archaeological sites to work, paid, as a digger! I greatly enjoyed every minute of my ride through the Columbia Gorge with Zeno, and again wished he were one of the multi-hundred mile variety!


He dropped me at the Pilot in Troutdale, on the far east-end of Portland. I knew from 2008 that this was where the rail line ended, and since it was still relatively early, if needed I could get to the far west end by transit system. I wanted to pay a visit to my friend and '08 Couchsurf, Dave, who runs a marina off US-30 in Linnton. My thoughts were that if I could get there, it would be smooth sailing to Astoria, then the Pacific Ocean. My worry was navigating Portland. The day, however, had by now took on a life of its own.


Zeno and I had gone in for coffee and before he had even returned to the car, I had been offered a ride, literally, to Dave's doorstep. Brian had approached me asking to "buy" a cigarette. He was trying to quit, but was obviously jonesing! I have been there, and could sympathize! He noticed that I was wearing a "Michigan" t-shirt Lynette had given me, and I soon learned that he was from Schoolcraft, MI and had listened to my old radio station. We were fast friends and he, like Zeno, was an interesting guy but for very different reasons. I learned on the way to Dave's that he and his wife have 8-kids, and live for free on National Park and BLM land as they save their money. He was a self-described political activist, and had very strong views on banking and the nexus of political power.

Obviously, I greatly enjoyed our little ramble through Portland in his overfilled station wagon; one that was outfitted with a Corvette engine! Brian dropped me off at Dave's door, as promised, and out of my typical character, I gave him some money both out of great appreciation and respect. Eight kids? BLM land? That has to be a bitch at times.

I had called Dave from Troutdale to let him know I was around, 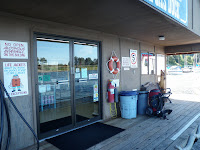 and to be sure he hadn't moved! We had not chatted since July '08, but had become good friends over the July 4th weekend I was there. As I walked up, it appeared little had changed in 14-months. Fred's Marina was the same, and I found him in the same spot I had last summer: manning the store. We quickly caught up, and exchanged stories before he invited me in to his floating home to meet his son, who is also quite a talented musician. Pretty soon, it was time to leave and continue up US-30 toward Astoria.

We took a picture, but before we could exchange out proper goodbyes, a sudden influx of customers needing gas for their boats, or candy for their kids left me standing there feeling slightly awkward. Then, in pulled a blue and white Master Craft needing gas. Inside was an odd pair. One looked to be a middle aged, boisterous Italian, while the other was a dreadlocked young man who looked to be barely in his 20's. The kid saw my pack, and asked if I was traveling. I said yes and, just like that, the most extraordinary, random weekend of either summer commenced.

Fasten your seat belts, and put your tray tables in their upright & locked positions...
Posted by Todd X at 7:27:00 PM

Email ThisBlogThis!Share to TwitterShare to FacebookShare to Pinterest
Labels: I-84, Oregon, Portland, Sit Down and Shut Up, The Dalles OR, US-30
Newer Post Older Post Home