Three of Andre's good friends joined us Saturday evening for the hour-long boat ride to Marks on the Channel for this combination business meeting/ anniversary party. 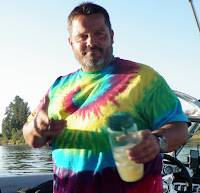 Cody was excited, knowing Lauren would be attending and that he was sure to eat and drink well! As usual, my focus was that of observer- but with a wrinkle. My disdain for predatory capitalism has been documented, so I myself found it odd that I held such an interest in the techniques of assembling such huge development deals. I expected to see Andre in action, pitching his idea to such a powerful, wealthy, connected group. It was one thing to dictate specifics to lowly vagabonds sitting on his own deck; how he handled this group should add some meat to the bone.

The skeleton remained bare; the meeting was a complete disappointment. The vibe seemed to me like an odd,

confused gathering who had no idea why they were here together. Two separate tables of people sat chatting away and enjoying some terrific food and drinks, and a few conversations in private, but the lightning rod presentation I expected never materialized. The anniversary aspect

of the gathering was, on the other hand, quite a success with Karen's parents celebrating their 41st in style. They were quite pleased. After a few quick hours, the group began to disperse and I was a bit dumbfounded. At first, I naturally assumed I had missed something obvious, but I hadn't. As the evening trudged on, Cody and I recognized the situation and happily fell into the roles we are accustomed to: drinking, mingling, and enjoying the atmosphere.

Karen's boyfriend is one of the more interesting characters I've met, simply due to the fact that he's actually royalty: The Prince of Ghana. I had been quite interested in making his acquaintance from the moment I first heard of him due to my intensifying interest in the 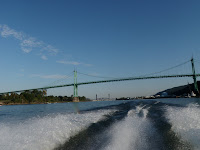 African continent and, specifically the role "charities" play. Ramses was surprisingly unassuming, considering the media-fed, flamboyant image one expects to see from an African Prince. He was an imposing figure; tall and muscular, but dressed modestly and had a soft, quiet, demeanor about him. Yet, he was direct; almost clinical. Ramses spoke to the point, and in thoughtful, unemotional tones. After Karen introduced us, we spent a surprisingly long time chatting about the dynamics of aid, politics, and what a person can do to circumvent the prevalent corruption and bureaucracy: the Business of Aid. He offered some compelling, detailed advice on how one can actually get on the ground and do the most good (for people rather than the "charities") in Africa, while offering an interesting perspective on our own country. 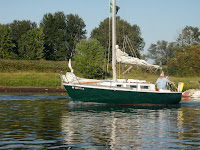 His insights quietly struck my exposed, nagging New Orleans Nerve; still sensitive from witnessing the ineptitude of FEMA and The Red Cross first-hand following Katrina. He obliquely confirmed that the best way for a person to be of "maximum assistance" is to BE there; getting your hands dirty, learning and dealing with the actual complexities rather than taking the "American Way Out" (my term) by writing a check, then pounding your chest and touting yourself a true "humanitarian." Ramses and I, on the surface, appeared to have many of the same interests and philosophies, although we failed to expand on them. Although I would later learn there were tensions between he and Andre, I liked Prince Ramses and wish I had more time to get to know him.

The gathering ended before 10 and being early, and sick of boat patrols, Cody and Lauren invited me to join them at a bar in downtown Portland. 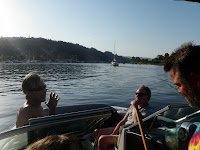 Interested neither in being the third wheel nor the sure testosterone display, I quickly declined in favor of the boat ride back down the Willamette. The ride itself was quite eventful, as the electrical system in the Master Craft began to fail! The motor was functioning, but we were five rather intoxicated boaters meandering into major shipping lanes- without lights! This...was not a Coast Guard friendly situation! Jim quickly went to work troubleshooting, and after an hour or so we had lights- as long as the speed was kept relatively low. What should have been an hour took closer to three!

Cody and Lauren had long since returned to the floating home by the time we drifted in from our own "Three Hour Tour." They had taken advantage of the empty house to spend some quiet time in front of the television. Our return obliterated that. Drinks were made, and soon we were engaged in an slowly intensifying, four-way conversation. Exactly the conversation I had hoped for earlier in the day, when Andre had explained the nature and severity of his potentially fatal condition. I had been relatively quiet for most of my stay, preferring instead (per the norm) to observe, listen, and offer insight or an exchange of ideas when appropriate, but not feeling the need to entertain the masses. In retrospect, this may be the Lesson of Dennis: Knowing when to speak and, more importantly, when to listen. This is an underrated, under appreciated, under utilized skill. One I've recently become acutely aware of. Tonight would be a time to exercise both. As the chat heated up, the night got interesting, and in the process the texture of my stay with Andre would finally become abundantly clear. The persistent Sit Down & Shut Up/ Center of the Universe ideas would once again claim their place on center stage, hitting their marks as if on cue...
Posted by Todd X at 8:39:00 AM