Chris and I had grand plans of being o 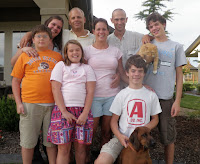 n the road early Sunday, and beginning a kind of reunion adventure west. Of course, plans are ridiculous, as I keep saying and eventually will realize. I was honestly in no hurry whatsoever. I was putzing around pretending to pack, while in reality I was enjoying a final, very cool day with Lynette and her family. Morning became mid-afternoon, and suddenly we found ourselves seated around the table feasting on delicious pork with the entire Fogg clan. It was a perfect ending to a perfect week.

As 5pm approached, Chris was itching to get moving. 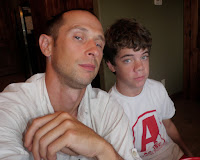 I sensed some very familiar, and foul vibes that began to stink of Michigan. He tried very hard to conceal his it, but a thespian he is not! I began to believe that re-visiting Spring was ill-advised. When Lynette invited me along to gather school supplies, I accepted. This was the last day I was there, we had a good moon to walk by, and besides: Chris was free to exert his sovereignty, and leave whenever he wanted. I silently refused to sacrifice precious time at Lynette's in order to accommodate his personal urgency to continue on. As always, there was no animosity involved, it just was matter of quietly saying, "In a hurry? Then...go." We had been here before.

The school supplies trip was short, and soon enough we were both packed,

watered, and taking pictures in front of Casa de Fogg. Ben wanted to visit a friend in Star, so Lynette offered to drive us down US-20 for a 10-mile head start. Brad stayed behind, so I gave him a big hug, and as Lynette, Dave, Ben, Chris and I drove away the realization that this visit had ended and that I was back on the road settled in. The reality followed shortly at a rural intersection on Hwy. 20/26. Lynette echoed Mike's sentiments exactly when he had dropped us off in Battle Creek: 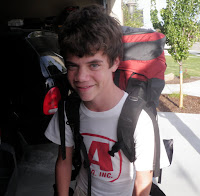 "I feel weird just leaving you here!" We laughed at the deja vu, and assured her that she was just playing by the rules! Saying goodbye was tough, but light. Dave had an odd look on his face that I still haven't figured out, saying finally, "You two sure have some adventure in you." We all hugged, then as we crossed the road I watched the new family members drive off. I would miss Boise, but have some priceless memories, and will forever feel Bob Seger's "traces they left on my soul"...and I don't deal in melodrama!

I had yet to decide on a tactically specific course. Either way, the

crossroad seemed to lie near the Oregon border in familiar territory. Fruitland, ID and Ontario, OR are places I had ventured through in 2008, and also relatively close to Chris' chosen US-20 that would take him toward Bend, OR. Neither of us knew rather anyone would stop for two apparent backpackers, so were very encouraged when, after 10-short minutes, we found ourselves in the back of a pickup heading to Caldwell, I-84, a Flying J, and a decision.
Following half a coffee, I ignored my

Spidey Senses, deciding to bypass I-84 (and the obvious route toward Fruitland and Oregon) in favor of embracing adventure, a new method, and trying out my new boots. We headed directly into Caldwell so we could chat, reflect, and relive old times. We did exactly that as we made the unexpectedly long walk thru the heart of town and surprisingly found ourselves using Google Maps to find US-20. Soon after dusk, we were descending a treacherous, steep 80 ft. concrete embankment beneath an overpass, walking Union Pacific train tracks into the back country, and feeling like the Intrepid Adventurers we fancied ourselves in the spring. Eventually, we were spit out onto US-20 near the I-84 interchange. We deduced that we had probably walked six miles... to progress three. That didn't bother me in the least. Chris and I had much to talk about; our conversations continue to evolve. We had both experienced much recently, and I noticed that our abstract ideas had much more personal flavor to them with actual life beginning to enhance, and often even supplant, empty words as the primary fuel. All was not well on the Vagabond Front, however. 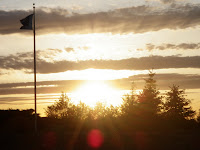 My conditioning became an issue. I was physically feeling the fact I had done no significant walking since April or May! My wind was fine, but endurance and muscle tone were not! Since Chris and I were contemplating an Eastern Oregon desert crossing, it was an acute concern. We knew from experience that tandem hitching is much more difficult. I was afraid that these grandiose notions, for me at least, were bordering on McCandless-esque hubris. Plus, I had no beaming interest in Bend. I needed to consider things carefully. A mile down US-20, away from I-84, 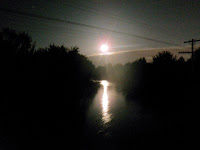 I decided it would be wise to bed down for the night and think things through in the morning. I could honestly see no payoff in continuing this direction, but knew I tend to become a bit more negative when I am tired. We hopped a barbed wire fence into some ridiculously tall vegetation, with me destroying my thin hiking pants in the process, and I quickly dozed off to the sound of coyotes with a growing sense that this made no sense.
Posted by Todd X at 6:30:00 PM