When Chris and I finally fell asleep late Friday night, the weather was clear with a beautiful star-filled sky. I had grown used to the aridity of Idaho and eastern Oregon, and apparently forgotten how quickly weather changes on the coast, particularly Oregon and Washington. When I awoke on my birthday, Mother Nature immediately reminded me, with a soggy, frustrating "gift." I had fallen asleep with the waterproof, external zipper wide open. Because I had only closed the bivy's bug netting to enjoy the night air, when it began raining the inside commenced collecting water. In a fog of sleep and haze of laziness, I semi-consciously pulled the goretex forward without sealing it, and went back to sleep. The old college try did not quite cut it, however, and when I awoke around 6:30 I found my phone, sleeping bag, and camera lying in a puddle! My camera's waterproof, thank God, but the sleeping bag was about to be stashed in the backpack for 2-solid days on the bus. Yay, mildew! And, the phone...yes, the damn phone again...was not working. This had a familiar feel to it! Happy 29th birthday again, Todd! We're off to a fantabulous start!

Cursing the memory of Bobby's pool, I deduced that the battery had 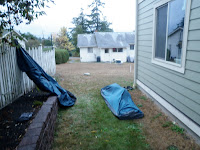 either gone dead or the phone was... phucked. To compound matters, I was the first one awake and, unsure if Wendie & Daniel were up, was afraid to open the noisy garage door behind which, the rest of my belongings, including the charger and spare battery, were stashed. There were things I could do to try to salvage it, but needed to have power. I paced around the front of the house in frustration until 7:30, when it was time to wake Chris.

The two of us were under the assumption the four of us were leaving at 8 or 8:30, so when I got the all-clear to enter the garage, I began something resembling hasty emergency surgery. I got signs of life and a signal with the other battery, but when I called Laina, she couldn't hear me! Also, there was a short somewhere, making sending texts impossible. Contrary to popular belief, wet electronics are remarkable resilient, as long as you don't plug them in to a socket when they're wet; let them dry completely. When I had returned home in July, to my horror, I actually washed AND dried my little mp3 player! Having gotten damp in Iowa, it was giving me fits before I washed it but, to my shocked delight, it has worked perfectly AFTER a cycle thru the washer & dryer! Remembering this, I borrowed Wendie's hair dryer and hoped for the best. I had limited success, and after a bit, I was able to at least make normal phone calls, but half of the phone's navigation buttons still were not functioning. This, I was fine with. I dried the bivy and sleeping bag as best I could before packing them away for our supposed 8:30 departure. Then, it quickly became clear that I wasn't the only one having a shitty Saturday.

As Chris and I waited expectantly outside, there appeared the final, most dramatic manifestation of the now-famous tension within. Daniel and Wendy had disappeared, and it soon became apparent that we were not going to make the earlier Bainbridge Ferry as planned, and as I'd feared the day before. I was quite glad I had not yet bought the ticket! Daniel then appeared, surprisingly wished us well, and went to leave-separately. Next, came the flying backpack. Wendie was clearly not pleased, and stepped outside hurling her daypack half-way down the steps, which run the length of their two-story house. Again hearing past comments about "The Buddha" in my head, rather than feeling the uncomfortable, I myself was silently amused. "How very, Zen!" With visions of Don Quixote's windmills combining with Phone Debacle II, I was ready for Port Townsend and the rest of Washington to be behind me, if I had to crawl all the way to Portland from where I stood.


Racing a Silent Clock to Seattle


Shortly after the daypack had skidded to a stop, Daniel was on his way and so were we. I sat silently in the back of the car, watching the clock as we drove toward the free ferry from Bainbridge Island to Seattle. At this point, all I wanted to do was get on my bus, watch my scenery, and wait for my birthday to mercifully end! And, it wasn't even 10am! This definitely had begun as the least enjoyable of all my 29th birthdays. I called Laina from the car, and again asked her to hold off on making the Internet purchase until Chris and I were on the ferry because, despite Wendie's proclamations, I was still far from certain I would make the Greyhound terminal in time. It was obvious that, even in a best-case scenario, I would need to hail a cab once I got across Puget Sound into downtown Seattle. Missing this bus would have far-reaching implications, and may have put my little house-sitting gig in jeopardy.

At the terminal, Wendie surprisingly gave me a hug, A strange embrace that reminded me of the Cody Hug! I was asking myself, "Really, Wendie?" and quickly thought how life would have been much simpler for everyone if had I just continued on to Astoria from Portland! At this point, the entire escapade into Washington seemed like my own foolish, ego-driven, "Attack on the Windmill" undertaken simply to eliminate a solitary state from some perverse, imaginary list. This was not too far from the truth, but would prove to be a bit simpleminded. Eventually.

My mood lightened a little at the ferry terminal once I knew my fate was once again in my hands. The ferry's schedule seemed to give me ample time to get 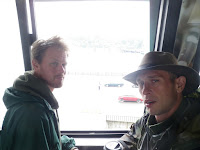 from the Seattle terminal to Greyhound, even if it would have to be by taxi. Our "plan" (ha!) was for Chris and I to take the Bainbridge Ferry into Seattle, where we would split off: me taxiing to Greyhound, and Chris meeting friends. But, shortly after we settled in for the short wait he learned that some of the bus/ferry routes he intended to use the next day didn't run on Sundays. He quickly reconsidered everything and decided to forget Seattle and return to Port Townsend from here. 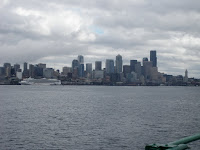 He hung out long enough for the ferry to begin boarding, and knowing how I guzzle the stuff, Chris even offered to pick up some Birthday Mate' from the pier and send it to me. What a pal! I gave him $10 to get some extra and after a goofy man-hug, he was off and I was aboard the huge auto-ferry into the heart of Seattle. I sat there watching the rain and repeatedly shaking my head as I thought back over this odd few days in Port Townsend...
Posted by Todd X at 10:50:00 PM