Considering we were awake into the wee hours, Friday morning began early 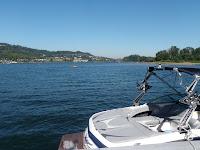 and I felt a bit unsure about my situation. There had been no discussion about how long I was staying, or whether Andre intended to get me back up the Willamette to continue on my way to Astoria. He had made an oblique comment the night before about possibly boating me all the way there, but that could have been drunken bravado for all I knew; nothing was certain.

Cody did seem eager to have me move on, however! 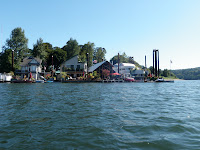 He not-so-subtly asked when I was leaving, what my plans were, and how I was getting out of Portland this morning! I found his keen interest and initiative into my immediate future quite amusing and considered reminding him whose home we were in, but packed my things just in case. Thursday night had been a blast, but the last thing I wanted to do was give the impression that I expected to move in! I took my pack up front to Andre's main house, and hoped that at least I would get back to Dave's place, 15-miles west of Portland in Linnton where Andre had picked me up. Secretly, I was quite tired and hoped it could be postponed for at least a day!

The first thing I noticed upon seeing Andre Friday morning was his excruciating pain. Upon waking Friday, he was nearly unable to move due to his right hip and leg. His entire right calf was extremely swollen and dark purple in color. I saw that he was on a plethora of medications, and that he needed alcohol, on top of his meds, to help ease the pain. I empathized both with the pain and alcohol relief. Beer had worked wonders for my lower back pains in the past, and I felt badly for him. About all I could do was try to be of assistance whenever I could. I had been hearing things about a spider bite since the night before, but was unsure to what extent this was connected, or its severity.

The weather had warmed significantly since The Dalles, and the three of us soon found ourselves parked on Andre's deck beneath a hot 90-degree sun. Contrary to Cody's implications, Andre showed himself to be hospitable and clearly in no rush to have me move on, telling me to "Get that fucking backpack off my deck and in the back tinder!" 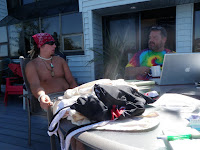 Soon, Andre engaged into business mode arranging a huge meeting for Saturday back at Mark's on the Channel. Through well-placed comments, it was indicated that both Cody and I were expected to come along. It seemed obvious that I was welcome (at least by Andre!) for the weekend and until they set off for a seemingly spontaneous sailing trip he had concocted after agreeing to drive Cody to Vancouver. Nothing specific was "said" however, so I was left guessing, inferring, and grasping at disjointed details for the rest of the afternoon. This set the tone for my entire stay!

I was a bit disconnected due to fatigue, but the rest of the afternoon was filled with an unreal sense of inner-calm and quiet. Cody fawned over his new I-Touch that Andre had bought him, while I periodically fed the duck that has adopted Andre before we set out for another ride aboard the boat.

I learned quite a bit about Andre that afternoon, as well as night before. He had been the owner of a very popular Mexican restaurant chain, Pablo's, in Portland, and made great deal of money selling them. However, there was much more to him. 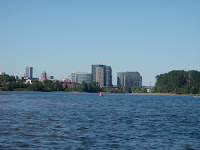 If Andre made a killing in the restaurant business, he committed monetary mass-murder in land development. He began to share bits and pieces about how he had bought, conceptualized, developed, and then sold 26-miles of prime Mexican coastline. Saturday's business meeting was intended to bring influential business owners and investors together in an effort to lay the foundation to replicate the successes of Mexico in Portland. There were to be friends, developers, elite officers from financial institutions like Bank of the Northwest & Wells Fargo, and even the Prince of Ghana in attendance.

"A fucking Prince? Didn't I just wake up in the weeds the day before?"

I was beginning to understand just how connected Andre was, and why people were treating him like a Rockefeller. To many he was. And, he acted like one; enjoying the role!

He seemed to fancy himself a philanthropist as well, with his favorite question being, "How can I be of maximum assistance to you?" At first glance, one could think that this was an egoistic, wealthy man who got a kick out of flaunting money & influence; a charge out of changing lives with the stroke of a pen or a wave of his hand. Being human, there may be aspects of truth to these assumptions but, as you'll eventually see, they would, predictably, be strikingly shortsighted and unfair.

Once business & the afternoon boat ride was finished and the sun was setting, Andre invited his friend Jim over for dinner and a chat about renovating the floating home. 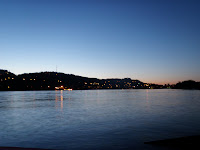 He then reassembled the previous night's cast, plus one: Stacie. Stacie was that rare breed: A woman who makes me laugh! Stacie was a whole lot of fun to talk to, and we got along famously!

Karen was only around briefly, bowing out gracefully, preferring a quiet night at home while Young Cody was not exactly pleased about heading off to prowl the Willamette again, probably because he wanted some time on-the-town with Lauren. He suggested to me that we abandon ship to experience Portland's nightlife, but the notion of carousing amongst hundreds of barely post-adolescent children, with more testosterone than common sense, didn't appeal to me.

"My, how times have changed!" 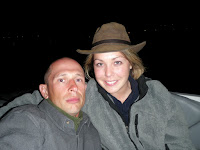 It also struck me how presumptuous he had become; now complaining about the manner of the extravagant hospitality he was receiving! Young Cody would indeed be fun to watch, although it would be key for me to remain patient and remember that he was only 21!

Seeing this performance reminded me that no matter how affluent you become or the toys at your disposal, you eventually adjust to your "stuff" and are re-introduced to the same person you were before. A closely guarded secret in the age of consumerism.

The night was calm compared to Thursday, but interesting nonetheless. We were joined on the Willamette Patrol by Cesar, an attractive, young Peruvian that as it turned out was a romantic interest of Andre's. Andre had been understandably quiet about proclaiming his sexuality, 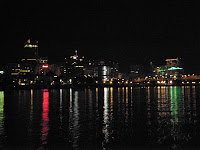 but I knew immediately. I honestly don't care about "orientation"; who a person chooses to have a relationship or sleep with is a non-issue. It doesn't effect our relationship in the least. However, it is interesting to see the process of disclosure and sobering to see how people's reactions to sexual preference are still a concern.

Andre recruited me to drive the boat for an hour or two while he and Cesar chatted privately, so I played DJ and guided the Master Craft beneath all of Portland's bridges--enjoying myself immensely! Portland, it would seem LIKES ME!

Friday was September 11th. This is always a day of reflection, as it is for many people. I was amused that I had watched no television and thus had not been subjected to the obligatory, melodramatic jingoism. While my political teeth instinctively tried, and failed, to bare themselves, I realized that it was pointless. When you accept that politics and politicians are pointless, just whom do you bite? Everyone?

From that vantage point, I saw that while 2008's musings had often been rants at the state of Nation, World, and Society, while this year has been largely absent of that flavor of venom. I've issued not one single "Rant Alert!" Pondering 9/11's past, particularly in radio, I again snickered when I saw that this particular 9/11 was the happiest. The irony of this, is that it was also the 9/11  that I "had", by far, the very "least". And, was keeping company with the most affluent man I have ever met!

After a few hours spent drinking and floating, we were back at Andre's. I glimpsed things to come when Andre played a VHS recording from 1985 showing him as an ambitious young man, on the cusp of of getting married, and contemplating a run for Congress. It also showed his mother, who since has passed away. I was struck by how intensely nostalgic Andre was; often on the verge of tears and repeatedly saying, "I've had a GREAT life." Once the video ended and Stacie had passed out, Lauren, Cody, Andre, and I had a brief but interesting conversation about life. It was here for the first time that I began to sniff an intense philosophical familiarity that I found fascinating considering our drastically different backgrounds. I hoped I'd get a chance to hear a bit more from his unique perspective, and get an opportunity to explore the growing sense that, again, I was there for a reason. Indeed I would...
Posted by Todd X at 5:12:00 PM