Waking up Labor Day Monday, it was increasingly clear that crossing the desert, potentially 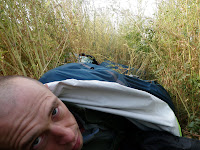 on foot, to get toward Bend, OR was neither desirable nor beneficial. Chris and I made our way back to a Stinker gas station we'd passed a mile back and that had been closed the night before where we could get coffee, and sort thru it from there.

It was a quick conversation. I was in no way compelled along Chris' path, even though I still had no idea where I WAS being driven. I just KNEW instinctively it was NOT there. This was a big deal. We had learned our lessons from May and June, and were not going to repeat these mistakes. We had come to the conclusions that it was imperative that we stay on our own personal paths; not falling victim to the idea of "partnership."

I had written, sometime around our split in Omaha, that I needed a return to my 2008 mindset. As soon as we separated, and after the intense period in Santa Fe, I was able to do exactly that. It sustained me through Wyoming, the Dakotas, Montana, and Idaho, and, as a result, this supposed "secondary" phase of 2009 has since exceeded the "primary!" This is not "coincidence, but rather a direct result of traveling solo. The fruits of following my own compass rather than attempting to incorporate and compromise. "Go on your adventure. And go alone." I wish I could remember the author.

The Stinker was a colossal fork in the road, 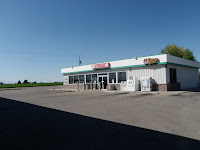 but one with an equally massive arrow! This decision would reap huge rewards, and very soon, although, of course, I had no idea at the time. The fact that there was minimal struggle, first in the reading, then in the following of signs, in retrospect, is very encouraging. I would also be handed another lengthy "Sit Down and Shut Up" exercise that, upon completion, and again, would blatantly and immediately present itself!

We shook hands and wished each other luck. Chris' ultimate destination was Port Townsend, WA so we kept open the idea of meeting in Portland. With that, he was off on his adventure into Oregon.

Now, what the hell was I supposed to do!

I figured that, with I-84 nearby, I could take some time to figure it out and in the meantime try to get to US-95 in Fruitland as I was considering a change in course toward Winnemucca, Nevada. I was immediately offered a ride half of the 30-miles there by a young kid named Jason, but I didn't like the sound of the drop off, and felt compelled to remain at the Stinker to charge batteries and gather thoughts. A couple hours later, I wandered up to I-84, set up on the ramp, and thus began the next "Sit Down & Shut Up" period!

I spent the rest of the afternoon on the ramp next to a fireworks store, then as evening approached, decided to relocate to the next exit about a mile away. Taking the adjacent old US-30,

I spent the rest of Monday evening sitting, listening to Mp3's, and thinking. I was oddly content! In no rush whatsoever, despite Chris' repeated mentioning of a "Tortoise & the Hare" race. This reminded me of someone revving their motor at a stop light, and when they peeled out, just sitting there watching them. If he wanted to run...let him!

Monday night was spent behind sagebrush 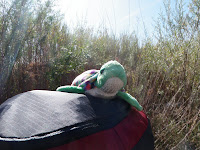 next to the exit ramp, and Tuesday began a reminiscing tour of 2008. I finally got my ride to Fruitland with an unnamed flatbed driver, and after a fast, familiar re-visit, was picked up by another Jason who was on his way to Ontario, OR to be drug tested, as part of his parole. He was quite cool, and made it clear that "he" had yet to be drug tested! 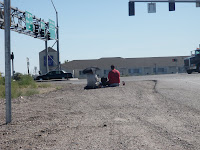 Ontario had an odd, ominous vibe from beginning to end. There had been a roving band of vagabonds who had been starting fights and ripping off the Pilot station, so it was essential to keep my eyes open. I was also sharing the ramp with a drunk couple, so by the time Wade stopped and offered a ride to Baker City, I was more than happy to go.

Wade was quite interesting. He was a rancher who lived in the mountains above Baker City, and quite religious. But, he was also open minded. We had a terrific conversation about our beliefs, and it reminded me a tiny bit of Randleman in that we both knew we were talking about the same things, just using different terminology. The ride was quick, and after we chatted for another 15-minutes outside the truck stop, I was quickly back to the ramp to try to get to La Grande before dark. The sun was setting, so I was beginning to scope out places to sleep when Jeff pulled over. He was on his way home to La Grande, and was also one of the coolest rides to date. Just a great guy to talk to! I wished that La Grande was a bit further away, or that he was heading to The Dalles!

By La Grande, I was a bit creeped out by the '08-familiarity, so I asked Jeff to drop me at the Flying J on the far east end of town, to avoid a complete repeat of my 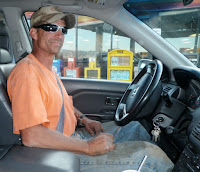 La Grande- Fruitland day last summer. This, as it turned out, was ill-advised. Despite the truck stop, the ramp had little traffic. I had begun feeling an odd compulsion to see The Dalles, so I made my sign, but after a slight and futile effort, I returned to the Flying J for the buffet, to charge the phone and continue updating Boise. I did meet a trucker who offered a helluva ride; to Albuquerque!

After a night spent behind the trucks, Wednesday began much the same way Tuesday ended: not getting a ride. The weather was beautiful and I had vowed the night before not to sit there long, after realizing the error of the Flying J. To correct it, I made the surprisingly quick 5-mile walk into the heart of La Grande, and began to see the friendly and familiar sights. I considered spending the whole day there, but felt pushed to the I-84 ramp, where I had launched after the freight train in '08. This was the spot where my love for interstate hitching had hatched.

Once there, I didn't even have time to light a cigarette;

I almost instantly found myself in another pickup bed. Mark was on his way to Eugene and was offering a ride all the way to Portland. I enjoy the back of pickups on hot days, and spent the trek across the Blue Mountains there before, once through Pendleton, he decided I was no threat and invited me up front.

I learned that he was up on "menacing" & weapons charges, and going to Eugene for a court date! Great! He spent what seemed like an hour professing his innocence, then giving me the tour- guide-treatment as the landscape changed and we entered the

Columbia River Gorge area; some of the most beautiful landscape I've ever seen. I liked Mark, but he was a bit of a drain and my urge to see The Dalles was increasing the closer we came. To his surprise, I asked him if he'd let me out there, and I was soon unloading next to Columbia River at Riverfront Park.

I had seen the Gorge under a moonlit sky from last year's freight train,

and knew it was gorgeous. The Dalles had stuck in my mind, but it made no logical sense to disembark here, rather than in Portland. I kept hearing "Sit Down & Shut Up!"

Email ThisBlogThis!Share to TwitterShare to FacebookShare to Pinterest
Labels: Idaho, La Grande OR, Labor Day, Oregon, Sit Down and Shut Up, The Dalles OR
Newer Post Older Post Home