Wednesday's plan was to vacate Wendie's place so Daniel could work without being distracted by us. Chris was working with Wendie's non-profit, and part of his appointed/assumed duties were to post fliers off at various businesses around Port Townsend. This was perfect. He and I could spend the day touring the town, and in the process do what we do best: jabber.

We were up, out of the bivies, and walking in typical Pacific Northwest weather pretty early. Almost immediately I noticed that the pinching in my left Achilles still hadn't gone away, and was quickly getting worse. I had felt something similar while walking through the Marin Headlands north of San Francisco last summer, but that had involved carrying 55-pounds up-and-down steep trails. This was different. I was carrying nothing, and it had been lingering since my walk into La Grande the week before. I had felt nothing the entire weekend at Andre's, but had not been wearing the new boots either. Soon after I put them on and started up a hill, pow! I had naturally assumed that it was due to the boots being new, and with time, it would go away. Either that, or I had a peculiar case of temperamental tendinitis. Regardless, I figured I would man-up and deal with it.

Chris and I meandered rather lazily around Port Townsend most of the day. There was no hurry of course, and our conversations were quite productive. Chris is great for unique insights and while sitting on the Sound,

he pointed out that the Andre experience reminded him of a test. Being tempted with sacrificing my chosen course for some sort of material reward. I hadn't even considered it, but it made a degree of sense. The conflict of how I was going to present Portland 2009 was already agitating my mind; was I going to sugar coat everything in some hope that I would benefit later on? The instinctual answer seemed obvious, but was far from it in practice...as you've already read.

I both needed and appreciated the feedback, and was reminded of how we got to where we were. Then, through the day and periodically throughout the course of my stay in Port Townsend, Chris and I reflected back over the past 5-months and gushed at how things had both gone according to our rough "plan" and looked nothing like it at the same time! We marveled at how the actual experience had by far exceeded even our highest expectations. Everything from the Veggie Bus, to Massachusetts, Michigan, Devils Tower, to Leslie. Everything from Carthage through North Dakota all the way through Montana to Lynette's in Boise had exceeded my wildest visions and, after all this, I was coming off what I knew was something on par with Dennis and likely the most powerful experience to date. As the reality set in, I was literally humbled and becoming a bit overwhelmed at the same time. All of this, from walking out the front door? Wow.

The Achilles became progressively worse as the day wore on, and it quickly became clear that I had a potential problem. I had intended my stay in Port Townsend to be a quick one, and had discussed with Wendie riding down 101 with her to Port Angeles either Thursday or Friday. From there I could use public transit to get as far as Forks. This would put me close to the Pacific Ocean, where I would camp for a day or three, spending my birthday there. However, the heel posed a problem. Remember, it's illegal to hitch in Washington. That would mean there was a possibility I would have to walk the short, but now-painful distance to either Cape Alava or Cape Flattery (the northwestern most point of the lower 48). Then, what if the heel refused to improve? Limp the entire Washington coast to Oregon? Yes, this tendon was causing me ill-timed grief. 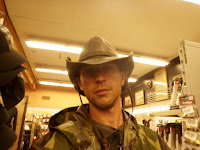 I checked Port Townsend's local outdoor stores to see if they may have some clue as to what would cause such an odd problem, but they knew nothing other than that they'd earn a commission if I bought their boots. What was obvious was that the heel needed rest and the boots needed more break-in time to isolate the problem. When Chris and I returned to Wendie's, the pinch immediately vanished as soon as I removed the boot. This was going to be tricky.

The day was eventful for Chris as well. When on a whim he decided to ask about a temporary job at a coffee shop, I suggested the tactic that to date had NEVER worked for me, but made sense: explain what you're doing and offer to fill the position until they found permanent help. The girl behind the counter suggested he take an application home, and return it early the next morning when the owner was in. Those seemingly "random" events again.

Once back at Wendie's, we had dinner and just hung out before retiring to the bivies and chatting some more rather early. Chris had to get back to the coffee shop early, and besides, he had fallen into a nice routine. I told Wendie that I may indeed take the ride to Port Angeles on Friday if it was OK, but wanted to have another day to test the Achilles and think through other options, just in case.

Overall, despite its beautiful setting I wasn't impressed with Port Townsend at all and was over it after a half-hour. It had its charms, but to me had the telltale smells of a white-bread Santa Fe or Taos with white-bread architecture, and the same foul breed of Progressive, Stealth Capitalists that pollute Taos's Plaza and litter Santa Fe's Canyon Rd. All condemning Capitalism while hocking their special brand of overpriced, "Alternative Spiritual Artistry" to doe-eyed, naive tourists with too much money to spend. And, everywhere in Port Townsend were generic Hippie status symbols, like VW buses and other worn out, cliche' proclamations that "Here's yet another Hippie Expressing their Individuality!" Just like the rest of the herd: 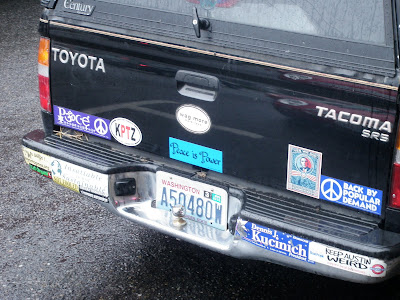