Part of what separates the wise man from the fool is recognizing ones own limitations. Mine were now fast approaching, and it took some work to acknowledge the gorilla in the... bivy?

Chris was up with the sun on Thursday to meet with the owner of the coffee shop, so once I woke up I went in to say hello to Daniel, got a shower, then waited for him to return. Chris was quite pleased to announce that he had indeed been hired, and would in fact start to train the next morning. 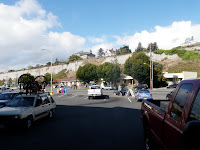 We had a neat, continuing discussion on how money seems to appear just when each of us need it and the biblical concept of Mammon: Rather than hoarding your money USE IT, let it flow through you, and trust it will make its way back when it's needed. This anti-capitalist philosophy retook its position front & center, and would be put into practice sooner than expected. I also found it curious and amusing that the Bible repeatedly came up!

From Wendie's it was back to town where Chris would continue canvassing. The heel was no better (as soon as I put the boot on it yelped), 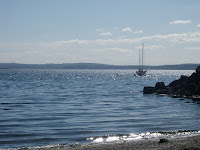 and since I was way behind on the updates I planted myself on a picnic table downtown next to the water and began a massive update on the blog. The weather and people watching was great, and before I knew it I had spent 5-hours regurgitating Portland into Pocketmail. It was the perfect way to spend the afternoon.

When Chris was finished, we stopped at one of the sporting goods stores where he replaced the hat he had lost in Denver, 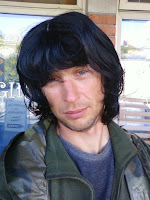 we played dress-up with display wigs (almost buying one!), then stopped off at the library for Internet before slowly making our way back to Wendie's. Chatting with Chris, the ideas from Portland were coming to life and this pesky topic of Mammon resonated loudly in my mind. I relied on Chris to explain the concept, having never wanted anything to do with the Bible, and it fit perfectly with what both he and I had personally experienced separately. Every time we each have needed an influx of cash, it's showed up- one way or another. Sometimes through our own efforts, and sometimes out of a clear blue sky.

Mammon dovetailed perfectly with other concepts I had come up with: Tuning in to and listening to the that 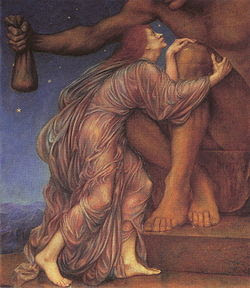 Voice, taking care to sit down & shut up now and then remembering that you're not the center of the Universe, and trusting that things will work out, yet not simply the way you WANT them to, but the way they're supposed to. A fine philosophy indeed, and one that has yet to disappoint in any way. My frustration and impatience always springs from craving control, thus the foundation, to me, is to be aware of and try to reign in my ego in an effort (EFFORT I say!) to take care that I'm seeking truth rather than simple self-serving glory.


"Clever children in school base their egos on being clever and on being right all the time. They dislike group work because they cannot then show the rest of the class where the good idea originated. When the ego and thinking are treated as the same thing, there is a reluctance to be wrong and a need to defend a point if view rather than explore the situation." -Edgar de Bono


I think I can speak for Chris (I'm sure he'll correct me if I'm wrong) when I say that all the signs to date point in the same direction: 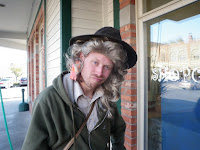 there's something guiding us and when we make seemingly ignorant decisions, it's as though we are gently chastised by being cut off from the Flow and left sitting for a time alone to ponder what we did wrong! It's like a Spirituality for Dummies class. And, we're the Dummies.

This concept is not without its reward system. I myself attribute meeting people like Dennis, Andre, Leslie, Ciel, Pat and others to tuning into and listening to this. Chris and I experienced this in tandem in Cape May, NJ in April, and to attribute everything to mindless coincidence, from where I sit after a year and a half, is infantile. As recently as that morning in The Dalles, I had plugged in and was immediately "rewarded" by that seemingly orchestrated chain-of-events that dropped me directly into Andre's Master Craft. Had I not listened to my instincts in any of the handful of mini-scenarios through the course of that day, I don't meet Andre. Of course, I would never know that and you can drive yourself batshit contemplating such things, but thankfully I've seen enough to quit the logic-driven contemplation. It's fun to retrospectively reflect and pointless to stew over obvious mistakes, even though I do. This Universe of ours has shown a way of compensating my frequent ignorance!

Chris and I also discussed something I found rather daunting. My lessons and insights borne from this odyssey have progressively intensified. 2009 has made 2008 seem like child's play. As Chris and I looked back over the past 5-months, I was dumbfounded in realizing that this winter and 2010 likely will make '09 seem rudimentary as well! How in the hell is that even possible?!? But, after thinking about it the Classroom Analogy fits. I could have never dealt with meeting and dealing with my estranged family in 2008. I couldn't have dealt properly with Dennis' demise, and the toolbox surely would have been a screwdriver short if I had dealt with Andre last year! '08 prepared me for '09. If 2009 is preparing me for 2010, I'm excited, a bit intimidated...and addicted! It's a good thing for one to be excited about ones future.

Back at the house, it was decision time. Wendie was making her final trip for the week to Port Angeles on Friday morning, and I needed to decide rather to leave with her, and if not, what? Typically, indecision roared. My birthday was now two days away, and it seemed like it would be great to spend it camped on the Pacific Ocean. Yet, I also knew it was likely foolish to put myself in an uncertain situation being already partially hobbled! "If a man can't recognize his own limitations...he deserves what he gets!" Remember, Todd? I've preached it 100 times; it was my own voice ringing in my head.

I began exploring other possibilities such as busing or training back to Portland, or on to Redding CA, but neither sat well after; not two-days earlier rejecting similar ideas. I was grasping for straws, but during an extended conversation with Laina, I learned that there was a possibility I could earn money house-sitting for a week back in Santa Fe, but she couldn't confirm that until the next day. In theory, this would more than cover the cost of the bus ticket, and provide me the needed decompression time to process everything.

Yes, returning to New Mexico appealed to me, even though I didn't WANT it to. I was mentally exhausted and knew that I had as of yet barely scratched the surface of a Rainier-sized Mental Mt. Andre. The more I thought about and discussed these new Andre-influenced ideas, rather than coming to conclusions, I would just find new valleys to descend into and explore. I had a mouthful, and it seemed obvious that I needed to chew, swallow, and digest it!

In the end, I concluded that it was best to let Laina find out what she could, and base Friday's decision on that. There would be no Port Angeles, and if I got to the Pacific it would be elsewhere...
Posted by Todd X at 6:37:00 PM