From its beginning, Monday held a distinctly different feel; as if I were back in Santa Fe on that weekend before I pointed myself towards Devils Tower, trying to figure out how this next phase was going to look. However, the difference was also glaring: I had relinquished control and left things in Andre's hands. Cody was growing increasingly restless, despite Andre's constant demands to "stay present." 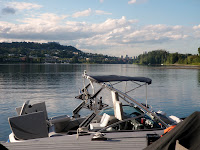 He apparently didn't take into account that it is much more difficult when the "present" is constantly changing and the control of another, even if you are their dinghy! Andre had apparently underestimated the extent of what needed to be completed before departing for Vancouver. However, keep in mind that he wasn't preparing for a simple sailing trip. Included were the treatments in Vancouver, and a trip to England to undergo further, experimental procedures to deal with the brown recluse bite. As morning became afternoon, it was obvious that the possibility of an early evening departure had faded away. The details were never-ending, and he seemed to surrender late in the afternoon. After taking the boat out one last time to clean it's hull, followed by another short sight-seeing seeing tour, Andre set midnight as the new target.

And so it went. Cody had learned that, due to Andre's chat with her boss, Cody's mother had decided to accept his offer to fly her from Ontario to British Columbia, and join them on the sailboat. I thought this was beyond cool, and remember thinking that he had somehow married different aspects of his nature by giving Cody's mom the opportunity to eliminate excuses, 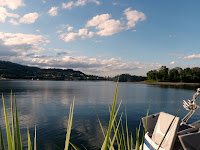 AND taking further control of the situation by proactively taking her boss out of the equation himself. That was ballsy AND effective: Andre at his best. There were problems, however. The uncertainty surrounding our own departure made setting a time for hers difficult; coordination was needed in order to meet her. In addition, there were complications in purchasing an Air Canada ticket from the US. Andre curiously seemed mostly oblivious to all of this.

As for me, I was feeling like a ping pong ball. The idea of sailing in Vancouver was, surprisingly, not a big deal. I wanted to see Vancouver, definitely wanted to learn to sail, and loved the random nature of the trip. However, it seemed more and more to be checking something off of a list, rather than something I was supposed to do. Plus, considering Cody's situation with his mom, this seemed like it may be a good time to bow out gracefully, and let them have their time.

I could take it or leave it, and considering the potential complications at the border? Well, I had a decision to make. My options were relatively simple. I could just continue on the path I was walking 4-short days ago: reuniting with US-30 toward Astoria. Or, I could take my chances getting into Canada. If that failed? Then, I'd be sitting in northwest Washington state somewhere near Bellingham, but this wasn't bad either. Chris had since arrived at his sister's place in Port Townsend, across Puget Sound from Seattle, so reaching Wendie's little haven would be relatively easy provided I could figure out the ferry system. I ran the idea past Chris via email, and they all seemed fine with it despite an appreciated warning from Chris that we would be sleeping in the yard, and a mysterious, tense "weirdness" on the ground in Port Townsend. Monday evening, I leaned toward going for the gusto. I really liked the idea of "going international," knew Vancouver was gorgeous, and perhaps a different setting, however unlikely, would allow Andre and I to further discuss things. If I was denied entry? Well then...fuck Canada, eh! It would be a good story...eh!

Shortly After midnight, Andre surprised me and decided to sit down for a chat that began with a surprising, brief analysis of ME for once! How ironic! Andre had many nice things to say about me, reiterating how he had been impressed 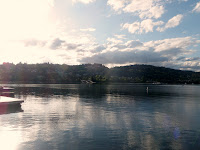 with my compassion and adding descriptions like honesty, forthrightness, and one that stunned me because, to my recollection, I had never heard it applied to me before: noble. I was flattered, but a bit taken aback. It was not lost on me that the terms "honest" and "forthright" are double edged; easy to appreciate when their blades are not facing you! Yet, I also took his choice of adjectives as an indication of things he respected and appreciated. We would, obviously, see!

We then briefly revisited both of my proposals from Sunday, and discussed some of the logistical details and problems of the assistant position we had superficially discussed late Saturday. I was a bit surprised, but he seemed to be moving in a positive, yet pragmatic direction with it. Andre moved on to make a point to observe how he had liked an earlier comment of mine, "Portland seems to like me," saying it sounded genuine, and had a tone that resonated with him. It was genuine, I explained. I had always gotten a great vibe from Portland, and Oregon in general. If anyone would have told me that this visit would increase it ten-fold, I would have gone into hysterics. Yet, wonderful things happen here. I've meet tremendous people like Andre, Dave, Karen, Stacie, Bree, and others in Portland; there is an energy here that powerfully agrees with me. I laughed out loud as I realized, for the first time, that I had made more friends in Portland over the last 4-days than I have made in Santa Fe over 2 1/2 YEARS! When I expanded that to the previous month and hitching from Wyoming thru the Dakotas to Oregon? Well, it became a comical, yet fierce personal indictment of Santa Fe! I began to ask myself, again, "what the hell am I still doing in Santa Fe?" I'm a recluse whenever I'm there, having no further interest in "tuning in" to its special breed of pretension. There is most definitely "something about Santa Fe," as they like to say, but it's not what they would like you to believe! I've said it before numerous times, Portland and its inhabitants,on the other hand, seems to be much more genuine. Don't ever let them tell you that "everyplace is the same" or that "people are the same wherever you go." There are most certainly different personalities everywhere.

I tried as best I could to explain this to Andre, and he got it. Then, he began to suggest other possibilities for me--IN Portland-- naturally latching on to my radio background. When I emphatically explained that I had NO interest in re-entering the corporate-media cesspool, he added that he knew the owner of KBOO, one of the most renowned, public, progressive, radio stations in the country. And, one I had been introduced to at Dave's in 2008. I conceded that this may be something I'd be interested in, but not now. Andre was trying his best, but still could not completely understand this compelling need to continue what I'm doing...right now. "All who wander are not lost!" I repeated that I knew I was where I was supposed to be, and that any sort of "vocational opportunities" would need to be explored in that context; in conjunction- not as a replacement. I elaborated that I would, however, likely be very interested in a part time position at KBOO, if I were also working with him, and possibly learning more about his land development concept at the same time.

With that, the conversation returned to Vancouver. He wisely admitted that it was too late for him to make the drive all the way there this late; it would just have to wait until morning. He asked where I wanted to go, and I countered by asking what was on the table. Andre stunningly offered to drive me to Astoria if I liked, and when I mentioned Chris being in Port Townsend, he offered to drive me there as well! It would be a longer drive, but he would enjoy the route, being more scenic than I-5. Of course, he added, I was welcome to come along and try my luck at the border. I asked him if I could let him know in the morning, he said sure, and we were off to bed to get rested for what shaped up to be a pivotal Tuesday.
Posted by Todd X at 7:07:00 PM