Leaving Andre & Cody at the supermarket, it was nice to feel as though I were traveling again. Northwest Washington was definitely new territory for me, having only gone as far as Tillamook and Portland,

the weather was sunny and in the 70's, and so far the people of Washington seemed quite friendly.

The last fact for some reason surprised me. Even the bus driver smiled and said, "Welcome to Mukilteo!" as I climbed aboard. The bus took the scenic route all around the little town, and seeing my backpack, one particular gentleman took a personal interest in making sure I arrived where I was going. He offered ferry schedules and pointed out that once I got to Clinton there would be a free bus that would carry me all the way across Whidbey Is., confirming the information I had gotten from Laina a couple hours earlier. He said that the bus was coordinated to meet my ferry, so as long as I immediately got off the boat when it arrived and went straight there, I would be sure to catch it. Since it was already 3pm, I was slightly concerned about having to camp for the night, but all indications were pointing to arriving in Port Townsend that night.

Andre knew what he was talking about. The bus did in fact literally drop me at the Clinton Ferry ticket window, and after a short wait I found myself on the auto ferry, sailing to Whidbey Island.

I knew beforehand that this part of the country would be impressive to see, but once actually on Puget Sound it was breathtaking, reminding me of what I imagined the Alaska coast to look like. With the combination of mountains and sea, I was surprisingly mesmerized and thinking that this would be an incredible place to explore.

The bus was indeed waiting in Clinton, and was indeed free. I settled in and enjoyed the hour ride nearly all the way across the large island to Coupeville.

Whidbey Island is beautiful. It's sparsely populated and forested, with quaint little towns that reminded me of an episode of Father Knows Best. "Wholesome" was the word continually in my mind; something from a slower, calmer time. I thought about the Twilight Zone episode Willoughby in which a stressed out New York ad executive is transported by a magical train back to the late 1800's and the slow paced, wholesome town of Willoughby. He initially fails to get off the train to investigate, but becomes obsessed with it. At the end of the show, he musters the courage to exit at the Willoughby stop, and in the next scene it's good ol' 1955 again, where rail workers find his body assuming it was a suicide. Willoughby. Whidbey. You Devil, Rod Serling!

My Coupeville connection was painless, and the next stop was Keystone Harbor where the Keystone Ferry would sail me to Port Townsend on the northeast shore of Washington's Olympic Peninsula.

Just missing one, I spent about 90-minutes waiting for the next ferry as the afternoon began to fade to early evening.

As we sailed toward Port Townsend and yet another meet up with Chris, I snapped dozens of pictures. It was incredibly beautiful. I had long since nearly lost my bearings and had no idea what I was looking at, but I loved it! I called Chris via Wendie's phone as we approached Port Townsend let him know I was there, set up a place to meet, and marveled at the scene before me. Port Townsend in an incredible setting. There were sailboats glistening in the sunset, and I felt like I had been transported to another country. That wouldn't last, but it was nice while it did!

Soon enough, Chris and I were jabbering as usual, catching up on the events of the last couple of weeks. We had parted ways in Idaho something like 10-days earlier, but it felt like a year due to the events crammed into those 10-days! He had met me near the ferry terminal, and we walked to a co-op to meet his sister, Wendie, and before I knew it we were dropping my pack into her garage and having dinner. Since meeting Wendie in New York City back in May, I had wanted to meet her boyfriend, Daniel. By all accounts, he sounded like an interesting cat. He was a unique person, having along the way combined survivalism with environmentalism while working with the government and other organizations in somehow maintaining hiking trails.

Through the course of the night, the conversation took an amusing turn as the three of them began discussing a "feeling" they had that there may possibly be a "devastating, apocalyptic earthquake" in the next few days-particularly on that Friday, the 18th. Since my birthday is the 19th, I made it quite clear that I would not tolerate Armageddon striking on this particular weekend. It would have to wait. As fun as the conversation was, there was one particular point of quiet contention; one that will have a familiar ring to you the seasoned reader.

Wendie has always struck me as a strange yet familiar breed: the most intense "Buddhist" I know. She also seems to me to possess a similar type of anger boiling just beneath the surface that I sensed in Lynette, and that I am sensitive too. I have always wanted to ask her how Buddhism, the religion of peace, enlightenment, contentment, and acceptance of where one "is," was working out for her, but after a week with Andre, I was in no mood to challenge anyone. Especially not in their home- where I was not particularly welcome in the first place! However, During our Apocolypto discussion I did ask if the earthquake and ensuing devastation did actually happen, would be a good idea to have guns to go along with a garden, oatmeal, and goodwill toward man? She replied in her familiar, forceful tone that she believed "the Port Townsend community" would rally together supporting each other, and there would be no need for firearms to protect anything. "Apparently a drum circle followed by a chorus of Kumbaya conquers all evil." I thought. "Again, let me know how that works out."

I, of course, found this laughable and not wanting a confrontation, worked very hard to contain myself in the tenuous setting! Perhaps this would be the case if, like on Little House on the Prairie, an orphanage caught fire or there was a barn razing. But this was not the context of the conversation. We were discussing a Katrina-like, cataclysmic disaster, where the unprepared become desperate for survival and either anarchy or martial law reigns. In such a situation, when those who don't have inevitably become desperate they will just "take" without any concern for morality or harming the supposedly "evolved" of our precious species. This is fundamental human nature, survival instinct, and you need look no further than the inner-cities or other poverty stricken parts of the world. Would you carry prime rib thru streets in Ethiopia, counting on the conveyance of your philosophy and the moral deference of desperate men? If so, you deserve to lose it. Again, with all due respect, and much is due, this seems to be the case of a separation from "An Inconvenient Truth." Unless Port Townsend, Washington is the one place on earth where human nature is subjugated to Progressive Ideology, I suspect that once word of their Haven of Bounty spread... well, I'm reminded of a line from V for Vendetta: "What usually happens when people without guns confront people with guns?"

I've heard this worldview also manifested by those hippies who call for "bloodless 'social' revolution." Che Guevara understood this perfectly well: First and foremost, people will NOT revolt to change when they're fat, comfortable, and content; there needs to be a real sense of anger and desperation for people to even adjust their asses on the metaphorical couch. And, that desperation had better be accompanied by something more than a willingness to blog, mindlessly chant angry slogans with a mob, and espouse philosophy because, when sufficiently annoyed, The Establishment will gleefully "Kent State" them. Google the rhetoric of Ohio's governor in the days leading up to the Kent State shootings; and these protests were mild by many standards. I would love to be wrong in this case, but the 60's proved that simple "hope" and a noble "want" for human evolution and togetherness doesn't quite equate to Utopia on the Hill. Worse, in a real post-apocalyptic world it would be suicide.

I surprisingly quoted our beloved Musty to Chris later on: "Evil has the advantage over good because evil doesn't care if it kills you." Sobering. Annoying. An Inconvenient Truth. What's worse, is that once the Ideological Idiocracy has worn off, they will likely realize that they are just as much at the mercy of nature as those who have lost the ability to organically provide food for themselves. The Primary Natural Law is Survival of the Fittest, not Survival of the Wittiest. If the world ever returns to that point, please surround me with them gun-totin' rednecks in Michigan, North Dakota, and Montana. We've walked Hippie Road before, and it's a dead end. Literally. 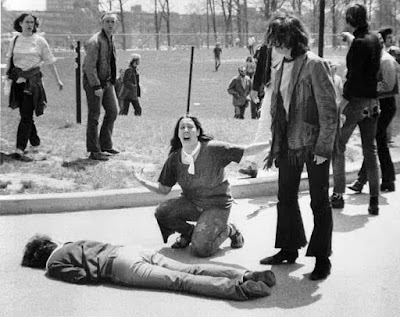 As for the expected "tension," it was indeed present, despite well-intentioned efforts to contain it. Chris had thankfully prepared me for this, and in the meantime heightened my senses to where I was now curious to see where it manifested itself! I was initially expecting to camp in a local public park, where Chris would presumably join me and we'd relive old times. However, this plan was inexplicably altered and I joined Chris, who had been for a week sleeping in the yard next to his sister's house.

As Tuesday came to a close, I had a laugh at the day; waking up in Portland, falling asleep inside the bivy in Port Townsend. Chris and I spent a good deal of time chatting about Andre and Chris' own trek through Oregon. I was quite eager to get a fresh perspective on my week in Portland and begin the process of mentally sifting, a process that what was sure to take some time.
Posted by Todd X at 10:19:00 PM