For context sake, it may be important to elaborate on the progression of my friendships with Andre and Cody. Saturday afternoon, Andre expressed something I found quite remarkable; I had made an indelible impression by simply offering an arm to help him of the boat! I had never consciously thought about it; that's what (I thought) people...just do. Apparently not. He shared that there are people who after realizing he is sick, refuse to touch him. This immediately reminded me of Dennis and the damage done to him by thoughtless, mindless cruelty. Andre is attune to the little things in people and, in his words, this showed him much. He was also, again in his words, impressed by the fact that I had shown a degree of genuine empathy & concern; asking questions and showing compassion in what he was going through. Again, this is something that an extraordinary percentage of people apparently avoid, presumably out of discomfort with the topic of mortality. I took this a step further, solely inferring that he was likely aware of the vultures circling overhead, hoping to profit from his demise. A bit of authenticity was probably a breath of fresh air.

The two of us had lightly tinkered with both the metaphysical and spirituality topics, and I had commented each time that we seemed to be nearly on the exact same page. Andre was HUGE on the now-familiar idea of "presence." Remaining focused on where you are, in the moment, rather than where you once were or may be going. The regular, emphatic reminders to "stay present!" were appreciated. They took me back to The Dalles, and showed in real-time how remaining present that particular morning was still paying huge dividends. Andre and I happen to share the same birthday, 9/19, and since he has a strong interest in astrology, loved to point out that we're both Virgos; meaning we're intellectual pricks who are difficult to argue with. Fair enough! Also, Andre was very concerned about the proper use of language, repeating, "words are important!" often and reminding me that this was a concept I held dear. Saying precisely what you mean is key to truthfully conveying thoughts, feelings, and ideas. "Call each thing by its proper name." And, it can be difficult. English has its limitations! As the weekend went into full swing, these commonalities began to break through a thin shell, and this early Sunday morning would see it's eruption. But, not without some tension. Can we say, drama?

Shortly after we returned, my mood had poignantly drifted off to an odd, peculiar, and unpleasant place. I had been pondering Andre's idea of replacing the teeth, and there was something about it that bothered me. And, the fact that it bothered me...bothered me! I was also getting a bit antsy to see where this little sub-adventure was going, and while struggling to stay present, I was not in the mood to be reminded of it! With another of these reminders, Andre added the footnote that I was putting off an "agitated energy," and asked why as we settled in to the living room. I admitted that I was a bit perturbed, but assured him that it had nothing to do with him. I was rather argumentative, combative even, as Andre perceptively warned Cody away from a verbal spar with me, explaining that "as a Virgo," I would systematically dismantle him, and not be gentle about it! From there, Andre did me a favor and began himself to challenge my verbal and mental limits, getting me out of my own head and onto my treasured playing field. At the same time, he was studying as I accurately parsed phrases, and if I identified his clever little argumentative fallacies. When I realized this, I rudely pointed out that I was NOT Cody, warning Andre, "I'm a bit more formidable than him!" He laughed, agreed, then continued on taking joy in our little exchange, as did I. My mental state thankfully went from agitation to focus, and I got the impression that he was starved for a little competition.

Lauren herself seemed to enjoy watching Andre and I playfully go back and forth. She resonated on a frequency close to Chris, Steve, Andre, and I, but didn't realize it. That frequency is something Chris and I have become sensitive to receiving; I like to say I can "smell" it. Lauren seemed, to me, to be slightly lost and conflicted; cut off from herself and even remarking that no one sees the "real" her. But when she tuned in, that resonance just flowed! There had been a slight connection between us from the beginning, but she acted astounded...again...when I displayed some degree of a developed intellect! My healthy ego got a boost out when she declared, "Todd, you're really fucking smart!" Uneducated Todd's ego likes it when college grads proclaim his genius. Cody? He...did not seem so thrilled!

Our playful banter was the prelude to serious discussions, but as the chat developed, Cody degenerated into what resembled a sensitive child feeling left alone in his crib, metaphorically jumping up and down while screaming, "HEY Lookee MEEE!" Since I had known him, Cody had intermittently displayed the maddening habit of lobbing infantile non sequiturs into serious conversations. For example, when Andre would mention presence, Cody would respond with how he "loved getting high." Or "chasing tail." How Andre's neighbor was hot. Hey, when was the trip to Vancouver beginning? Or, how Andre needed to buy him an accessory for his new I-Touch. It was interesting to glance at Lauren after these little verbal twitches. The two had developed a bond, but there appeared to be an unspoken, subtle conflict as to how to deal with this periodic Cody Dichotomy. For me, however, patience is not yet a strength. Especially this night! His intellectual farts drove me to, then beyond the border of Batshitsylvania! My tolerance for Romper Room evaporated when we finally broached the topics that I had hoped to explore with Andre, and even Lauren. I dropped a few direct hints as that "line" quickly came in to sight, trying to keep it light, but at Cody's final attempt to nuke this talk, my passport was stamped. I snapped.

I was suddenly infuriated, and don't remember exactly what he or I said, but my contribution was likely loud, and something to the effect of, "Why don't you just shut the fuck up if you have nothing to say?" I had challenged Tarzan's manhood in front of Jane. Sitting next to him on the couch and in an adrenaline filled/alpha male state, I then acutely eyed how Cody, who had been so full of bravado to that point, reacted. He was more than a decade younger, had 50 pounds on me, and had the woman he was wooing watching from across the coffee table! This...was not the smartest thing I have ever done! But, from the start I had sniffed out and identified an insecurity in him, and instinctively knew that I had an advantage. He would probably snarl, growl, timidly show his teeth...then whimper and put his tail between his legs. After a few exploratory, pride-driven barks that I returned each time with an increasingly and authentically enraged Shut the fuck up!, that's exactly what happened. And, thank God! 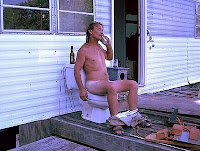 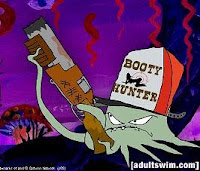 For now, and with a little help anyhow.

Andre watched this brief exchange with what resembled an odd, annoyed amusement. He didn't bother to intervene, nor did Lauren, who was stunned by the sudden intensity in the room. They quickly resumed chatting, while we sat quietly on the couch and I tried to deal with a sudden overdose of adrenaline. My heart was pounding, I couldn't catch my breath, and was actually shaking a bit; never good signs for me. I didn't realize how angry I had actually become! As I calmed, I could finally see the reality of the situation, and felt like an ass. Maybe on some rationalized level I was technically justified, but this was a perfect, undeniable example of one of my greatest, lingering shortcomings: intolerance. Cody after all is just 21, and actually light years ahead of where I was at his age. I all too often lose sight that people are at different points in their own lives, and fighting their own battles. Center of the Universe, anyone? Amazing how versatile that simple little idea has become! I quickly apologized to Cody, and meant it. He returned it, and we moved on.

To be fair, Cody has a ton going for him. I like Cody, but then again so does everyone, and that's engineered. He's a good looking, charismatic, smart kid who seems to face the familiar battles, but on the surface seems to spend little time on the plane of introspection. In retrospect, my intensifying frustration was actually a backhanded compliment, stemming from rare, but remarkably insightful comments that were borne from his experience. It seemed a pity that most of the time he prefers a place at Puberty's Brothel, and uses his looks and personality to manipulate and snake-charm folks into making him the center of attention. My radio days exposed me to innumerable attention-addicts; I can smell them out in a minute. It took about 10 seconds to see this interactive dynamic with Cody & Andre, one Andre enjoyed. As a rule, those who are the most "charming" usually have the greatest need for your approval; perfected charm is poorly concealed insecurity. However, and to Andre's credit, I had overheard comments on the boat earlier that implied Andre not only understood this perfectly, but enjoyed encouraging Cody's role as court jester.

Not long after, Cody and Lauren were off to bed, leaving Andre and I alone in the living room. It was probably 2am, but I was primed. With one simple question, we were off and running a marathon. It was time for us to get to know each other, and for me to figure out why I was here. Andre could not for the life of him comprehend what I was doing. He assumed that I was looking for something specific "out here" and for the 50th time asked me, "What do you want?"...
Posted by Todd X at 2:00:00 PM